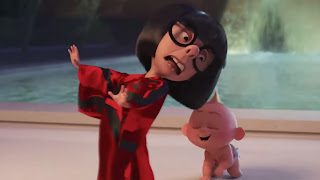 It's been in forever since we've been to the moving pictures.  Over a month and a half since the last one.

And with the Incredibles 2, about 15 years later.

Remember when Pixar was original?  Then came some questionable choices (I still think Monsters Inc sucked).  The first Cars movies was ok.  Two?  No.  Three?  Fuck no.  Then there was Planes, which from what I could tell was Cars with wings.

That said, I immediately loved the Incredibles. It is close to a perfect movie as you can get - fun, funny, exciting - all in one.  Is it possible that Holly Hunter has never been better in a movie?  I'm 99% sure it's the only movie in which I can stand Samuel L. Jackson - and it may have been years before I even knew it was him.

As fun as it is / was - there was no better performance than that of Edna Mode, voiced by the writer / director, Brad Bird.

Pixar announced the Incredibles 2 maybe four years ago - and they never deviated from the release date, even though they put out mediocre move after mediocre movie.

Yes, the movie was well done. The story was somewhat predictable, unfortunately, but it was still well executed.  Yes, Edna was great, and as much as I love Holly Hunter, the star of the movie is Jack Jack for sure.

There were just some really good animation elements to the picture, be it character affectations or one scene where Elatigirl fights a supposed villain and it seems to go from Pixar animation to animation animation. I found it very cool.

I only found one glitch, which comes early on - as the movie picks up right near where the original ended. It's a timeline thing but it bugged me a little.

When the movie ended, many people (not us) burst into spontaneous applause, which was kind of fun and yet annoying.  It was fun - I'll look forward to seeing it again.

I am looking forward to seeing this one.