Hell is for Children 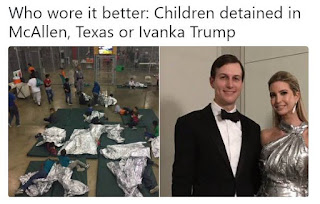 I'll be the first to admit that I don't like kids - in general.  That said, is there anything more heart wrenching than seeing and hearing them being taken from their parent?

You don't even have to imagine it - all you have to do is remember yourself as a child if you ever accidentally got separated from one of them and the angst you'd have.

This administration is reprehensible.  Forget the bible quote part........if you can. What a fucking buttload of bullshit.  ....though how fucking beautiful would it be if Jeff Sessions' church kicked his weeny ass out for multiple cases of child abuse?

But BLOTUS' claim - and that twat who heads Homeland Security - who says it was a law passed by congress....a democratic law.  That is a lie!!!!

Let's say there was a law though - just for argument's sake.  17 months into office, BLOTUS decides to enforce said (fake) law.  No one since 1997 - when the law this administration sites was passed - has been taking kids away from their parents.  And BLOTUS & Co hadn't been doing it either.

So the questions the press, congress and citizens should be asking is:  why now?

That is IF a law actually exists that does separate families.  But since there is not - the question everyone should be asking is:  WHY?

What stupid administration fuckwad was it that said there was a special place in hell Justin Trudeau because of challenging tariff talk.  That shitbag doesn't even know the special hell he and all his "friends" will be going - but it's hot, and plays the Beach Boys' "Kokomo" on an eternal loop.

Kokomo is too upbeat. It should be Feelings.

or "the macarena". or ANYTHING by ABBA.

Anne Marie can be so deliciously wicked!