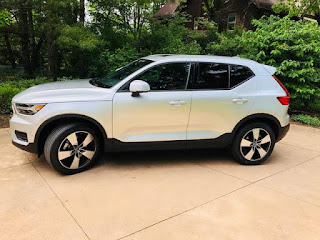 Ahhhhh......new car smell.  Is there anything better?

My 17 month car search is finally over.

I hate to say I regretted buying my Mercedes a few month after purchase, but I did. As the old knight guarding the grail might have said to me, "you chose poorly".

Driving it could be fun - sporty and all. It turns out, I just am not the sporty type. I think I'm all about safe and reliable.  I fight against that because it sounds like I'm boring - which, truth be told, I might be.

So literally 17 months ago I started looking. I didn't "need" a car, so there was no rush. Clearly. I drove them all.  Honda. Acura. BMW. Subaru. VW. Volvo.   Ok - I drove some of them. Obvi, I missed a lot of other dealers.

I liked something about all of them. And the CRV would have been a logical choice except out of 100 - their bluetooth and audio system ranked a 16!!!!  Connectivity was poor according to the reviews and the sound even worse.  Acura was out for the same reason, as both cars were built on the same platform and at the same plant.

It really came down to the Audi, Subaru and a last minute contender - the Volvo. As much as I'd like to make the choice with my head, that isn't always the way. Both Subaru and Volvo are extremely safe. Both Volvo and Audi are a bit pricier than the Subaru.....but both sport a few nicer options.

There is a heart aspect to car selection - at least with me. And I loved my Volvo from three cars past. I was in 'like' but not love with the car at which I was looking, but not enough that I couldn't just walk away if needed.  I like cars - I don't really love them.

There are two Volvo dealers here in the 216. I made sure they both knew they were competing for my business. The previous dealer I used was still in play, but this isn't really a time for true loyalty - though it plays a part. The second dealership had THE car I wanted - colour and options - but to say the salesman and sales manager were beyond bad would be a huge understatement. I would relay the emails and phone calls to 710 who was just aghast at their comments - as was I.

I pushed them a bit but opted not to rat them out - until I had a car in my hands, from either dealer.

As it came down to it, I went to go look at a car from the first dealership I thought I wanted. It was fine and all. Then the sales manager told me of another car coming in two weeks.  I put a fully refundable deposit down sight unseen.

Most cars have black or blonde seats. Both are perfectly serviceable, though dirty Petey or Shep paws make the blond difficult to clean. Black is hotter.  What I wanted.....and what I got was a little different. 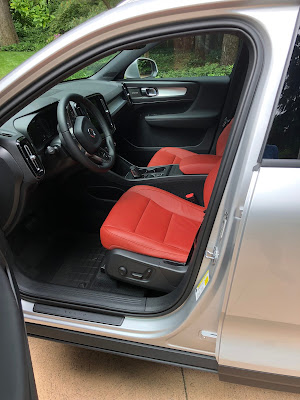 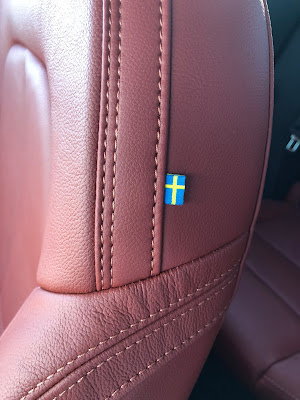 It's odd, but this totally makes the car. My first exterior colour choice was white, but that wasn't available until late July and it was missing some options. This one is silver. I realized the exterior colour means less to me, as I'm in the car and can only see part of the hood. But the interior is sweet!

I'm not used to all the gadgets. Part of the dash is like an iPad. You really cannot use it while driving, which is a blessing and curse. You would crash fiddling with stuff.  But the back headrests fold down at the touch of a button - or a voice command.  There are voice commands for most everything, so you don't have to fool with touching stuff while in motion.

The steering wheel can be heated - which is great here in CLE for seven months of the year.  One of the key fobs is different - as it is probably for parents to have their kids use, as it tracks certain things parents can watch. A little 1984, but kids with cars are assholes mostly. I know this, having been one.

A phone app will start my car remotely. Great for really hot or cold day so the heat or air come on before I'm there. It has a self park function that I doubt I'll ever use...I don't trust that. Ditto with a button so you can take your foot off the brake while at a light.

Best yet - it has a charging pad for the phone. No wires. And it makes sure I put the phone on it away from use / distraction when I drive.

I do fear the new car smell will wear off sooner than later, since I stake a sometimes stale-smelling down around town.   BTW..........he got his first ride yesterday. 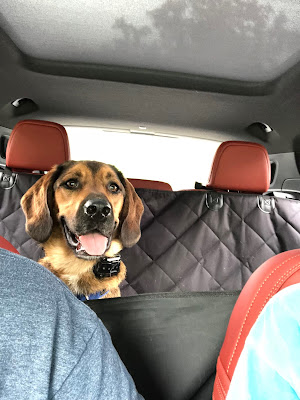 We had to cover his seats with a Mr. Dog.  I have no idea what girl dogs would use.

I think he likes being up a little higher.


Oh - and the car isn't all about the gadgets, it is a really really nice ride. And not that I care (wink wink), but it's fast.  Sometimes, you don't even realize you're going 82.   Honest.


...now it's time to draft a letter to that pain-in-the-ass dealership as to why they didn't get the business of mine they didn't really seem to want.

I dig the red seats. and shep looks quite comfy!

Sweet ride!!! This one is much more you (and Shep) than the Benz.