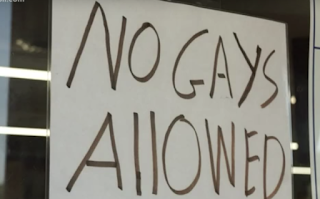 It's just about the hate.

With the SCOTUS ruling on the cake guy from Colorado, the nob decided it was ok to put the sign back in his store window.

I really don't know what to do with such unadulterated bigotry.

Sure - boycotting seems to be the thing to do, until you remember it's Tenne-fucking-ssee and the town has 2,508 folks in it.  I don't mean to cast wide-spread judgments, but he kind of lives with his target audience, doesn't he?  And dare I say, it's highly doubtful that Washburn is holding up the 10% of homos rule.

Boycotting isn't the right touch here.  Personally, I'd rather go in with like $2,805 in cash and use it all to purchase stuff.  Then on the way out, "see the sign", tell them I'm big fucking faggot and I want to return every single item.

It's not enough for them to know people might not come into their store. It's more important for them to see the money go right back into your pockets. Almost like they're now paying me $2,805 of their money because I'm that big fucking faggot.

THAT has got to hurt.

But at least call it 'hate'.  Stop pretending it's for religious reasons. Look in the mirror and just tell yourself you hate people. Certain people. Specific people - even though you've never met them and don't know them.

Hey Mr. Hardware Store Owner -  don't forget to cry 'discrimination' when someone turns the tables and refuses to serve you.  SCOTUS says it's ok.

Yeah, I'm preparing for the "Whites Only" and the "No Irish" signs any day now. One step forward, one hundred years back.

I want businesses to put up "no christians" signs and I wanna watch the freaks wail that they are being "persecuted". turnabout is fair play, I think.

I'm not a big believer in that God thing, but I'm pretty sure She isn't about judging and hate.