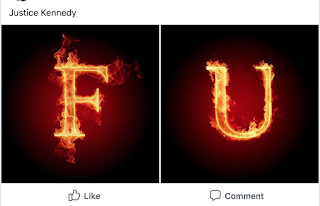 I've semi been off Facebook for the last few weeks.  I've tried not to look at some of the shit out there, and that was - or should have been - reinforced in the last few days.

I'm going for at least a month. If I need pics of friends, I can look at their Instagram.  Usually they are just pics and no stupid-ass posts.

Still, I scrolled through yesterday. Probably a mistake. I didn't stay long.

The day before, a friend texted me with a linked article how Kennedy (the justice, not the president, or tertiary MTV VJ) destroyed his legacy as a gay rights hero. Apparently that title comes with a robe and no cape.

The thing that wised me up to stop even viewing FB was the title image by the same friend.

As fucked up as the GOP is, there are some very myopic democrats too.

Honestly, shouldn't the "F U"s be saved for the Alitos, Thomases and the newest fascist? Are we truly placing blame on Kennedy for wanting to retire at the age of 82 and after working since 1961?  You think he "owes us" or something?   He's not supposed to retire because it's an inconvenience to you?

It's such flawed logic, and it makes me a little crazy.  So while I scrolled through FB, I am committed to not commenting on shit like this.  Six people "liked" the post.  I wanted to seriously ask they 'why?'.   But then it would become a flame war.  Sure, I'd prevail, but thousands would perish.

Flawed logic also applies to posts by people who demean for whom others voted  - or didn't, but should have.  I am super tired of the people putting up shit about the folks who didn't vote at all for Hillary because Bernie got screwed.

These non-voters are always friends of friends. Yeah - THAT scenario.  Please oh please, present me first hand information on this faction......I beg of you. And dare you.  Until then STFU.

The true flawed logic is:  Hillary won the popular vote and yet still lost the election. So please tell me how those alleged 2,031 folks who might have stayed home out of spite swayed an election ?

The people who say this shit are the first ones who would tell you not to tell them how to vote, but they're happy to tell you.

If you want someone to blame on today's Supreme Court - leave Kennedy alone. He is not your servant or saviour.  Blame Mitch McConnell.  He is the sole reason there will now be an unjust court. Yes, it will be conservative, but there have long been those. This goes beyond that.

McConnell's holding up Obama's nominee is the reason for what is about to come, so spare me your misguided indignation.

I guess I'm early to write a comment. I pick up on your disgust with the turn of events. I feel the same way. I'm glad you're here, and far better than I, expressing how you see the calamity this nation is in.

I admit I was annoyed that Kennedy said he was waiting for a Republican president so he could retire, and yet chose this racist pussy groping fuckmonkey as the right time.

That said, the biggest FU, the motherfucking fuckiest fucks of the FU world goes to that fucking Mitch McConnell. I seriously hope he burns in hell.

I think that Bob is doing an excellent job of channeling Anne Marie.

@deedles - FUCK YEAH HE IS!

I still think kennedy should have waited until after the midterm election to retire.