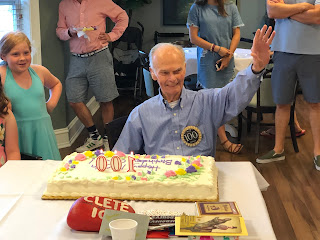 I've "joked" that I am not getting out this life anytime soon.  Both sides of my family have longevity.  Too much so - it could be argued.

This last weekend my uncle celebrated his 100th birthday!

Clete is my mother's oldest brother. His kids - my first cousins - are semi-considerably older than I. Tim, the youngest, is 16 years my senior. The oldest is maybe 25 years older than I.  Their kids are closer to my age.

His children - the three remaining - were present.  11 of the 18 (?) grandchildren (my second cousins) were there. And an unknown number of great grandchildren were in attendance as well.

I was the only one from my side of the family to attend.  I RSVP'd since I assumed I'd be taking my mother - but she wasn't feeling 100% and it was 95F out. You cannot take an almost 90 year old out who weighs about 80 lbs out into that kind of heat. So I went as her representative. .....and I do like my cousins who I do not see all that often. 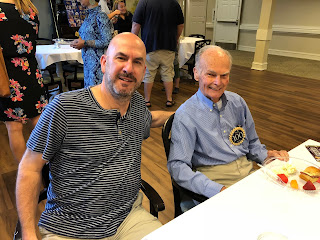 (Yikes that shirt needed to be readjusted!)

Still I had some good conversations with my second cousins - and some more adult ones with my first cousins, though most of them revolved around them asking about my mother, which was fine.

I took a number of pictures for my mother.

Clete was funny.  He told me he was going to make another lap of 100 years.  g-d love him, because I'm not even willing to do the full century.

good for him! Bravo !