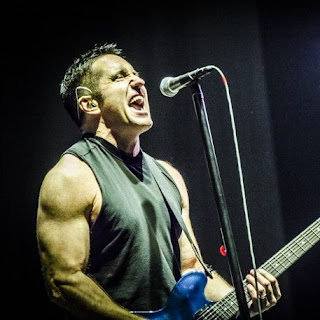 I am by no means the most ardent Nine Inch Nails fan. I know a handful of songs and little with which you can sing-a-long.

Trent Reznor (who basically IS the band) has some NIN project or other coming down the pike - the end of a trilogy he started in 2016 - so he was in the Sunday Times.  It was a short Q&A about several different things.

There was a question on if artists have a responsibility to address politics. Mr. Reznor believes they do, as they have a voice and certain influence. He thinks it is easier to keep one's mouth shut and that certain artists are more worried about their brand - and he only kind of sort of mentions Taylor Swift - but as an example, making sure there are more hers out there.

But it was the follow-up question that really hit me. Not the question, but his answer. The reported asked if it is different now than when he started the trilogy. He said it does, but it was the rest of his response that resonated....or Reznorated, if you will....with me.

My worrying about it isn’t helping anything. But what Donald Trump is doing is concerning and infuriating — and it’s not the conservative agenda, it’s not a question of religious preference, it’s not a question of should government be big or small. I don’t have any problem with those topics. But the disregard for decency and truth and civility is what’s really disheartening. It feels like a country that celebrates stupidity is really taking it up a notch.

Oddly it made my heart sink and swell at the same time. Trent put into words - those last two lines - what I knew deep inside, but could not quite articulate succinctly.

....and who am I to argue with a man who has arms like that?

and the stupids breed. constantly.