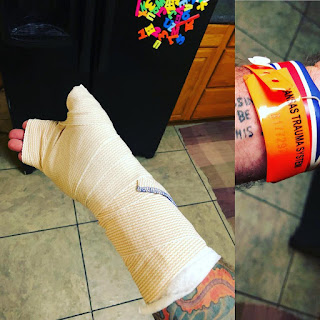 Admittedly, this isn't my story to tell. Nor do I actually know it - not really.

Erik posted a blurb about how times have not changed. Attacked he was, Monday night (possibly Tuesday morning), by two guys as he left a bar.

I don't know all the deets - as the kids say - but a friend came to the 'rescue', though both of them ended up in the emergency room.

At some point, the cops must have arrived, as all were given tickets since the po-po said they couldn't determine who did what.

Erik points out the attackers used the "f-word", so I can assume that it probably wasn't 'fortuitous'.

In the big scheme of things, as far as the law is concerned, I don't know it would matter if they / he was called 'faggot', as Arkansas has no hate crime law.

Erik's tale was a distressing thing to read at 06:00, and I'm sure way harder to go through.

It is a sucky way to be reminded for as far as we've come in the last 25 years, how minuscule it actually has been. Today's environment - for the last few years (when did BLOTUS start campaigning?) there has been a definite back-slide.

Here is hoping for a quick recovery - for both Erik and the nation.

Song by: Michael Kiwanuka
Posted by Blobby at 12:06 AM

Horrifying and depressing indeed. Here's wishing Erik a speedy, complete recovery - and the American nation too.

JFC! I hope erik recovers soon...this puts a damper on his livelihood. land of the duggars is AR; will he consider leaving?

everyone (except white xstain str8 males) has lost ground in the past 2 years...no thanks to the dump and faux noise and the xstains.