How Can I Refuse 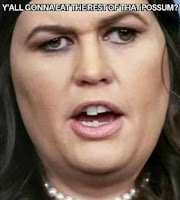 Poor "little"  (see, it's in quotes because she isn't!) Sarah Fuckabee-Sanders got her plus-sized panties in a wad because she was denied service at a restaurant in Virginia.

Of course there is / will be the right outrage and the eventual on-line and probably physical backlash to the restaurant and its owner.

Yes - while SCOTUS did the ruling, Fuckabee-Sanders praised it and the baker's right to free speech.

Naturally I'm biased here. I hate this administration, I hate this woman and every single thing for which she stands. Sure the bakers based their refusal on 'religious freedom', but the owner of the Red Hen could do the same thing. It's now the law of the land.  All they have to say is under the Ten Commandments they view 'lying' as a sin and the second biggest liar in the land was in their establishment which they could not condone by g-d's law.

All this aside, why should these clods expect to ever get an excellent customer experience?  Fuckabee-Sanders went to a town that overwhelmingly did not vote for BLOTUS. She had to know that. And she has the second most recognizable face in this administration (yeah, that includes you Pence).  Why the fuck did you think you'd be accepted in this place.........or any?

This administration is finally starting to see how disliked they are. Take this headline from Friday:

I think the most reprehensible thing of it all is Fuckabee called out the restaurant and her experience on twitter...............but not her own personal account.  Nooooo - it was on the Press Secretary account, which basically saying the government condones a praise or tear down any singular personal business, helping to sway public opinion.  Even I'll give that fat-ass president the nod that he uses his own account and not the POTUS one for his buffoonery.

If the Red Hen wanted to publicly shame Fucakbee, they could just say didn't have enough food - they had to decide to feed her or the rest of their customers.  That might shut her pie-hole.

Isn't publicly promoting (or criticizing) a particular product or service forbidden under the ethics rules that apply to White House employees? Remember Kellyanne Conway's promoting Ivanka's clothing line? Oh, yeah: ethics don't apply to this bunch, do they? A reader in Philly.

I have this sudden urge to go to small town, small restaurants for dinner and a hearty - way to go!

#2 - sarah fucktwat is immoral, a liar, unethical, and just plain stupid. her old man didn't raise her (or her murdering brother) right. and they call themselves xstains?

This really hurts my hear ....oh, wait, no,it doesn't. This lying bitch should be refused service everywhere, as should everyone in that regime.

Personally I'm super happy this happened, and to her. America needs to see that this idiotic ruling ultimately legitimizes discrimination based on religious convictions... ANY religious convictions. And I'm glad it happened to HER, a prominent member of the administration. And I hope it keeps on happening to her and others.

Lady - Don't you hate it when you a told 'we don't serve your kind"?