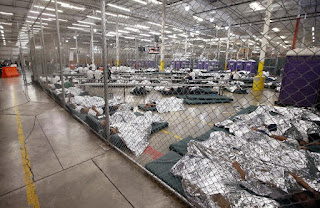 I really have no words on the camps for immigrant children. It sounds heartbreaking for everyone except ICE and just about anyone on Capitol Hill or 1600 Pennsylvania.

People think someone - or someone else -  is going to step in and do something, but that's not happening. We've been desensitized to the behaviour of this administration.

This is how it happens.

I know you all roll your eyes at me for the last two years when I put BLOTUS and Hitler in the same sentence or paragraph. Tough - I will continue to do it, as it's really not far from reality.  Throw some trains into the picture and you're right on target.

We are dealing with basically two groups of people here - Holocaust deniers or folks who are ok with the Holocaust.

Song by: Red Hot Chili Peppers
Posted by Blobby at 12:06 AM

I'm on the same page with you. it's disgusting. and yet if the RWNJ's kids were being treated the same way...

yes, we have no friends any more, except for north korea. and russia.