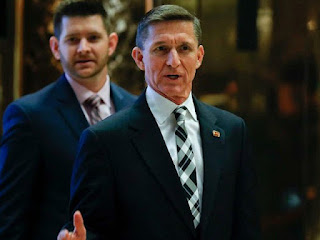 “Nothing about the guilty plea or the charge implicates anyone other than Mr. Flynn,”

So says Ty Cobb - not the baseball player, but the lawyer who sold his soul {assuming he ever had one, which is doubtful} to represent the most vile person on Earth.

Going by that sentence, Mr. Cobb is correct. And that is the public spin on Michael Flynn's guilty plea in regards to telling fibs to the FBI.

The plea and the charge were for Flynn only. But only a fool - and we can't rule that out - would think that Flynn's cooperation won't implicate others sitting (or squatting - yeah, I'm talking to you Jared!) at 1600 Pennsylvania Ave.

So Cobb did the public spin, but you gotta believe there are more than a few Hershey squirts going on in private too.

Flynn is an asshole, of course, so the stakes must have been pretty high to plead guilty and cooperate. In the near past, Mueller's team was also allegedly going after Flynn's son. Maybe he copped a plea to have them leave his son alone.

I can't imagine BLOTUS doing such a thing. Should they come for him, I bet he'd easily cough up either of his sons or son-in-law.

The difference is, of course, BLOTUS has the power to pardon. Flynn does not.

And since BLOtUS is so fucking thin skinned and vindictive, while he still pseudo-supports Flynn, I have to believe the man is dead to him. There will be no pardon for Flynn......though I suspect Flynn will do zero time if he cooperates fully.

That said - Flynn is now a felon. His guilty plea solidifies that. And since it is in regards - to an extent - with cooperation and lying about Russia, shouldn't he be dishonorably discharged from the military?  Should he not loose that former General status....along with the pension and benefits that come along with such a title?

You would think a felony and so-far borderline treason would be grounds for such dismissal.

So I know many are cheering for the downfall of Flynn....and I get it. So far to near BLOTUS have plead guilty. Others - and I'm looking at your Manfort - could be on the way.  The papers on Friday all had headlines pointing to that little neb, Kushner.

This is why I'm not cheering:  the pardon factor.

This big fucking slimeball of a president is, for all intents and purposes, going to get away with it. All of it, whatever he's done. And no one he knows or has done wrong will serve a day in prison.

Song by: the National
Posted by Blobby at 12:08 AM

Sadly, the government can't touch Flynn's retired General's pension, 3-star status or any benefits. He retired with full honors and that's the way it is. Although, as the daughter of a retired hard working army Sargent I do wish the army could strip Flynn of everything. He is a disgrace to the armed forces and is now seen as an enemy of the state.