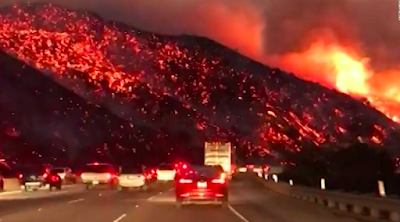 It truly is a horrible, horrible road, and normally I'd call it 'hell on earth', and now it literally is just that....right down to the brimstone.

Can you imagine coming around a bend in the road and seeing this image?

Los Angeles is a fun place to visit (well, sometimes), but a soulless place to live - at least in my HMO.

Still, the two things in L.A. to really see are in danger:  the Getty Museum and the Griffith Park Observatory.

I know it's coming, but has any evangelist say this is g-d's punishment for homos or anything?  I am thinking it would more likely be for the Real Housewives of Beverly Hills.

And while none of those women are real - silicone might stand up to a cookie tray liner, but with this intense heat, I'm guessing those boobs are just going to explode and then melt everywhere. I'd say the EPA would have to come in to clean up that toxic mess, but they've been defunded, so that's not going to happen.

I don't know what happens with all that botox and all those hair extensions.

In Ventura a few days ago they were saying the fire was ravaging an acre per 90 seconds. The Los Angeles fire seems to be moving faster.

Evangelists could blame the fags, but if we're talking disasters:  Hurricanes Irma, Harvey, Maria and this fire have all taken place since BLOTUS has taken office. Maybe g-d's trying to send a message to the republicunts.

Song by: Sam Phillips
Posted by Blobby at 12:08 AM

While I much prefer life in my beloved San Diego, LA ain’t bad. As far as the 405? It’s officially named The San Diego freeway and while often busy it’s actually not a bad ride. It’s dry and a little windy but so far we’ve been spared any fires down here.

We were thinking about loading up the trailer and visiting family in San Diego. I take this as a sign that staying put was the way to go! I remember growing up in San Diego and a fire broke out in the sixties in L.A. or L.A. adjacent (I was a kid and geographically challenged). I do remember orangey skies and ash falling like snow. Very surreal.

I think that like the fires in Napa Sonoma this is something very different. In the old days you would expect to see this in unincorporated less populated hills in range land (think Malibu). Now you are seeing this in areas that have been developed with municipal services (Santa Paula, Santa Rosa, Ventura).

Most likely your last sentence is correct, if you believe in an active god who 'does things'.