the Good, the Bad and the Dirty 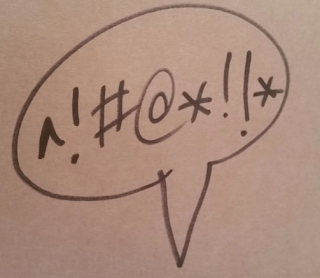 There was a day you couldn't say any of those seven words on television. Clearly, this was before the Sopranos.

While 'dick' isn't on the list, I'm amazed how many mainstream shows (i.e. not HBO) use the phrase.

Of those seven, even I only think one of those is bad, though I can't really say I use 'piss', or 'tits' in my daily routine. I rarely use the 'c' word, though let's face it, sometimes it's warranted.

Dick also pertains to, well, anyone in the BLOTUS administration. If they're female, I'm going with 'cunt'. Like I said - sometimes the word is warranted. I think it more than applies in this situation. I mean, be honest - how many times have you muttered the word when looking at, or hearing about, Ivanka?

I rest my case.

Honestly, I cannot tell you how upset I was over the whole administration and their edict to the Center for Disease Control about seven other words: Vulnerable. Entitlement. Diversity.  Transgender.  Fetus.  Evidence-based. Science-based.

Science and Evidence based for an agency that - in its own title - controls diseases. I'm really on-board with that faith-based Ebola team!

This is what a white, xenophobic, homophobic, pro-life, anti-science administration looks like folks - in case you weren't paying attention.

I love the 'entitlement' one. The GOP thinks Medicare and Social Security are entitlements, but giving tax breaks to kerjillionaires is not.

I kid you not when I say how out of sorts I felt last weekend about this entire chain of events. I can't even quite pin-point the level or origin of my discomfort - though I have to assume it was that when science deniers get in office, the billions (not millions) of people who will end up suffering.

I don't think I'm being out of line when I say that defunding agencies who utilize science is next on their list.

The head of the CDC said “there are no banned words at CDC.”  Good to know, but Health and Human Services - the parent department - this might not be true. I doubt they'll let the CDC skate.

Allegedly - it sounds like in the CDC budget those seven words have been replaced. If true, it is not too far of a hop, skip or jump that any report or scientific findings that might come down the pike. Or no longer come down the pike, as the case may be.

I will give it up for whomever is continuing to project things onto the BLOTUS Hotel in DC.  This was them last night.

There are no "banned words". Even the CDC admits this. The term "banned words" was used by a journalist to describe this to generate the exact response you just gave. Sometimes our "friends", you know...the people we determine hold similar world views. Well sometimes they aren't our friends, they just use us for their agendas.

Fake news is alive and kicking.