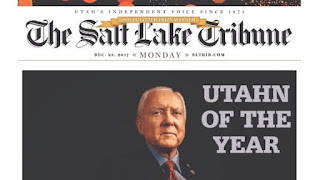 "They" say there is no such thing as bad publicity.

I think 2017 can pretty much disprove that theory, huh Kevin - Harvey - Matt ?

"They" also say that {absolute} power corrupts. I think we have far too many examples of that phrase proving itself right.

Then there is the confluence. Where the two meet, this week you get dickwad Orrin Hatch.

Do not get me wrong, Orrin Hatch has always been a dickwad. Like McCain, here and there, he'll be the voice of "reason" in a Senate that not only has none, but even someone like Charlie Manson can have a lucid thought amongst those 100 douchebags. Make no mistake: Hatch is a douchebag of huge proportions.

So much so, that the Salt Lake Tribune, made up a word ('Utahn') and gave him the honor of being "it" for the year.

I know nothing about the Trib. I'm not sure if they're conservative or not. I kind of assumed they would be, as it is in Utah. But they did endorse Obama twice! So I have no clue.

What I do know is they called out Mr. Hatch - for his horrible personhood and for him to step-down. Normally when you've been named Something or Other of the Year, it's usually a good thing. Not so much this time.

The Trib pretty much broke the man's 2017 "accomplishments" down into three parts:

....and my fucking personal favourite:

If this were middle school, you'd tell him to get some aloe for that burn.

But here's where it just might not matter, because like it or not, DC isn't like the realm in which we live.  Orrin actually THANKS the Tribune for the honor!  710 thinks he is trying to spin it into gold, which is much more depressing than him being a dumb fuck whose lackies didn't even bother to read the piece and report back to him (I mean, I'm assuming he doesn't do any of his own reading).

My depression comes from that Hatch actually believes he can spin it - and that stupid fuckers will now also think it's some kind of honor.  It is all too much of a reality. It's out there in big bold letters and there are people who won't bother to acknowledge the questionable man he is - Hatch included.

It's hard to counter-act people who cry "fake news" when they're too stupid to read any news. I don't think that's a battle one can win.

He needs to go. Elected officials are like underwear. Gotta change them periodically, becuase they start to stink. But Hatch is particular odious. At least when Ted Kennedy was alive, the two balanced each other out, and they could and often worked each other. But since then, Hatch has grown insular. When he attacked Sherrod Brown, thta was when it became evident that retirement was a good option.