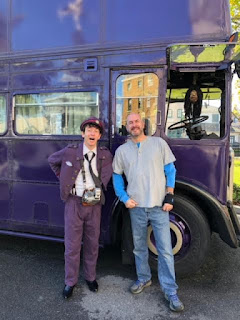 While we were in Florida, I considered doing a vlog. Two actually. I have footage for two. I've completed one. This one.

I have not yet decided on doing the second one. I mean, who really wants to see Blobby at the Magic Kingdom?

On the other hand who doesn't want to see Blobby at Harry Potter World?  There is really only one answer to that.

I won't say the video was half-baked, but I could have tied a few things together and down a proper ending, But truth be told, I was 22,000+ steps into the day on the way out of the park. I just wanted to get back to the hotel and get a drink. It actually never occurred to me to finish the video tightly.

Still, I think there are some funny parts - and there's a theme, much to 710's annoyance (I'm guessing).

That all said - Universal was better than Disney (in lots of ways), but we were happy had we just done Harry Potter.

For note:  Universal is comprised of two parks, with two admissions. There are parts of HPW in both parks - one with Diagon Ally and one with Hogsmead. This is brilliant on two levels.  A. It could get you to buy to passes (we did!). B. If you can't afford the price or the time, at least you get to see part of it. Both are very well done.

This is good. I had no idea that there was such an elaborate mock-up of H.P. sites anywhere in the world. I'm pretty sure there's nothing like it in England on anything like this scale. Even the Platform 9 3/4 notice at the real Kings Cross station has been moved from a pillar between the actual platforms 9 and 10 to part of a wall in the station forecourt - and railed in such a way that one can't charge at it! (Spoilsports!) But what you've now shown us is quite impressive, I must say. Thanks.

Btw: I note the world-weary way in which you say "Looks like the marriage is still on". :-)

I am not a harry potter fan, but I did like the drag queens.

Drag queens, ha, I'm sensing a theme. I've never seen Harry Potter or read any of the books. Not going to. This was fun!

Great fun, I am going to HP world in a couple of weeks.

I love me Harry Potter!