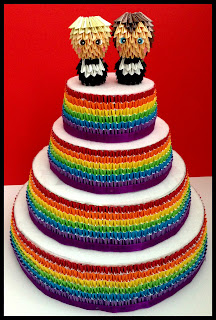 "The Bible says, 'In the beginning there was male and female,'" said the lawyer for the baker who refused to make a wedding cake for fags a same sex couple.

He offered to make any other baked goods for the men.

So goes the Supreme Court case:  Xtian baker vs two gay guys. It's not quite Brown vs the Board of Education, but there are baked goods, so...............this one might be a bigger impact for me.

So, from the baker's lawyer's perspective, is it the same sex marriage that was offensive or wanting a cake?  I mean, trust me - we all didn't get cake at our wedding - and for some of us, that was the only reason to say "I do" {yet here we are seven years later....and cakeless!}.

Because, knowing the guys were getting gay-hitched, and still saying he'd "make other baked goods for the men" seems like you don't care if they had gay wedding cookies.

I would have said cannollis, but they being cylindrical and cream-filled, might have rendered the baker unconscious.

The baker touts his christian faith as his moral compass.  Christian. As in Christ. Christ who never said boo about man laying down with man. You have to go pre-Jebus to get that inference. So lets not bring out the big JFC (or JHC to some of you).

But here we fucking go again with cherry-picking Bible shit. Fine if you feel the need to be true to this part of the writing, but then you sure as fuck better be true to all of it.

And oy, the arguments: free speech. artistic expression. religious protection.  CYA.  Dude - you're grasping at all hoping one will allow your hatred to continue and be validated.

Remember when back in the '60s it was, America: Love it or Leave It.

Well, hell, if BLOTUS and his followers are so unhappy with the state it's in, I'd say leave, but no one would have them.

Song by: the Fifth Dimension
Posted by Blobby at 12:09 AM

We had two cakes, including a wonderful chocolate one. So based on his theory, a bakery could refuse to serve pastries to anyone who came in wearing a cross- doing so is against their religious convictions - makes as much sense as his argument.

I love when you stand on that soapbox because you are bitch screaming the same shit I would be screaming if I were to do it on my blog. Only you do it much better.

As I've always said, religion belongs in church and your heart, NOT in business. I can't fucking believe we're STILL going through this.