Came So Far for Beauty 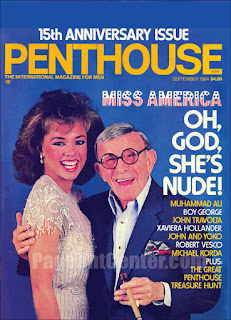 I'm not slut beauty pageant shaming, but c'mon ladies, when the corporate men at Miss America parade you around in swim suits and high heels - at the same time - (and with you seemingly being ok with it all) that you think they were wondering about the size of your cerebellum?  Your take on cold fusion?

I'm not saying you deserve the internal email exchanges on your looks or who you've slept with - or how many - but please dears, spare me the shock and awe about it happening.

We've all seen some weird-ass show / documentary on child beauty pageants. They are creepy - and not the judges, but the contestants and their parents.

As they age into the older circuit, exactly which part of the "pageant" isn't about objectifying the women?  And at what point does that lie they tell themselves become their reality?

Again, I get that men speaking this way - you know, "locker room talk", as the President says - but what part about any of this is "news"?  It's not right, but it is kind of expected.

For me, the bigger shock was that 49 former Miss Americas signed some petition. Naturally, I assumed it meant 49 contestants, but no......49 actual winners.  The biggest shock: 49 were still alive.

I'm not saying that other Miss Americas have not gone onto good careers, but very few of them in the spotlight.  Phyllis George?  Lee Meriweather?  I want to say Anita Bryant, but I don't know she was a winner. Well, I know she was a loser, but that had nothing to do with Miss America.

But those other winners didn't go onto public careers like Vanessa Williams. And ironically (or not, actually), she violated the terms of being able to fulfill the duties of the throne.  She violated the morals clause, something the CEO and his folks didn't really have, but still paid the price.

And ironically (or not), Williams went on to fame with, in a way, the objectification of herself. Partially on her terms, partially not. Yet she used it all to her advantage.

As any normal man would do, I flash on Candice Bergen in Miss Congeniality, insisting this is a 'scholarship program'.

All you have to do is see the Q&A section of the show to know that it's not.

Song by: Jennifer Warnes
Posted by Blobby at 12:06 AM

I have to say this #MeToo movement is getting out of hand. Most of it is legit with rape, attempted rape and guys getting all handsy in the wrong places, but the beauty pageant fiasco is pure BS. It was talk among men. Big deal. I bet 99.9% of those women haven't been all so pious in their daily lives. If you throw the right amount of money at them, they'd do anything you want. This #MeToo BS has to stop. It cost us a very good Senator(Al Frankin) and it's trashing some really good people.