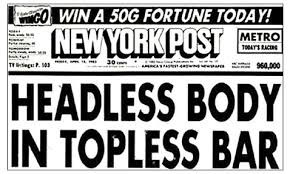 I don't have a single topic today.  I was this close to breaking my writing streak too.


Let's start with Manafort, shall we?

I don't want to sound all nuclear family and everything, but remember when working with the Russians seemed bad and unseemly? And that every espionage film with double-agents was the scum of the FBI, CIA or the likes?

Those were movies and bad Ludlam novels (which, yes, is redundant) and not real life. Though life is seemingly imitating "art" these days.

But really - how fucking stupid is Paul Manafort?  No - this time it is not rhetorical. On house arrest, out on bail, for colluding with Russia. He surrenders at least three passports, you know - because flight risk - and yet still is in contact with Russia.

Ok, I'll walk back the 'stupid' comment for now. Maybe it's not stupidity exactly. I think anyone involved with this administration thinks they're untouchable and / or the rules do not apply to them at all. It's simply amazing to me.

Here's hoping Mueller actually revokes his bail. I'd like to see a wait in prison until his trial too. And hoping it's not a speedy trial either.

Are you fucking kidding me BLOTUS?

I dare anyone to try to take away one fairway from his 139 golf courses.  This man is more vile than I ever ever ever could have imagined.

This is not the single payor system for which I was hoping we as a country we would get.

Reports will say that CVS is concerned about amazon going into the pharmaceutical business.  This is a company with over 9700 retail stores (though that probably includes Targets). I am not 100% sure they have lots to worry about.  They've got their own BPM, so no worries there.

Mind you - for every script you purchase in a retail setting, you spend an average of $11 at the front of the store. Your Whitman Samplers, your cotton balls, your gigantic xmas stocking.  I don't know that amazon are getting those impulse items while you wait indefinitely to have your Valtrex refilled.

My first thought was, 'what one humongous conflict of interest this seems to be'.

You will have your insurance company picking your doctor for you, where you can get your meds and what formulary they will allow in those med selections and which the doctor can and cannot prescribe.

Granted - that is kind of what happens now. The difference is options. And rates. Once you stop providing options, or limiting them, and it's big business running these decisions, regardless of what CVS says, the customer isn't going to win.

This a $69 BILLION dollar deal. They're not doing it to make a medical home for you, no matter what they say.  The inventors are looking for a positive margin on this deal and they have to make it somehow.....and that's off our backs.

I believe there are better ways to do single-payor.  Technically this isn't a single-payor model, but it acts like an all-in-one.  Still with Minute Clinic and all, Aetna could deny claims of anyone using an Emergency Dept or Urgent Care that isn't CVS run. That's a scary thought.

....and they shouldn't tell me from where I can buy my dark Milky Ways!

The Roy Moore election draws near (one week away)!  Allegedly the candidates are in a dead heat.

I'm not sure what this says about us as a country, Alabama as a state or the democratic candidate who cannot win against a life-long sex offender.  Or perhaps the three things are so intertwined that they cannot be extricated from the others.

Either way - we are fucked. Maybe a Moore loss could signal us back from the brink, but I'm not so sure anymore. I think the damage is done here. It will take decades to undo what BLOTUS has spurred in 11 months.

A democratic president could take office tomorrow and reverse any / all of BLOTUS' 'executive orders' and we wouldn't be where we were, let alone advance, for a generation or two.

I know. I'm a ray of sunshine.  Maybe I should have broken that writing streak after all.

We live in a bizarre time

That business in Utah disgusts me most of all.

My husband and I deal with Scripts for our less than emergency drugs. They are a whole lot cheaper. Otherwise, if we need an emergency drug refill or just a doctors prescription filled we go to the City Pharmacy which is a small home town owned pharmacy. Granted they don't have 24/7 service but their a hell of a lot cheaper than CVS. I think Amazon will take off like crazy with their pharmaceutical biz but only time will tell just how good they will be.
When I saw the story on Manafort I couldn't believe how blatant he is. WTF??? Does he think he's going to get away with this crap? He's got some cajones.
What bothers me is that during RNC last year, Ivacuum Head Trump said that her father was unimpeachable. If Mueller ever gets that Fat Bastard in Chief, it will take nearly 50 years to fix what he has done to not only the U.S. but the alliances with Europe. The really bad thing about all this is that Republicans will keep getting elected even after the fallout. Sometimes I wish we were like Iceland. The got rid of their Republican type party and made it against the law to vote for one.

Excuse me while I go slit my wrists.