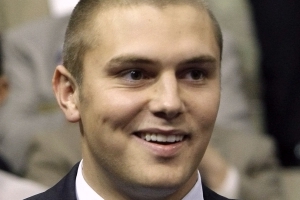 Folks.  Take a look to your left. This is what poor white trash looks like.

Actually, look at his entire fucking family. The words: "double wide" seem to be in their future....and present and probably past.

So are "restraining order" and "court ordered child support".

So Track beat up his daddy because he couldn't borrow the pick-up. Poor Track. Poor Todd.

Track, being a lesser Palin, doesn't even have his own wiki page for me to cross-reference. I checked Todd's and no one even cares enough to update his to include the assault from his eldest child.

Track, by all accounts, was drunk and taking pain meds. Todd greeted Track at the door with a pistol. Srsly. While granted he knew his son was probably heading over, Todd also knew enough about his son's behaviour to have a gun at the ready.

Todd still got the shit kicked out of him, so, that 'good guy with a gun' thing doesn't seem to have really worked in his benefit, did it?

This is the same dude who was arrested on suspicion of punching his girlfriend (classy!), and possessing a firearm while intoxicated. Oh, his girlfriend filed for custody of their child.  Whaaaaa? A child without marriage in a republican household???  But.......family values?  Where are the family values?????????

Caribou Barbie is trying to pass it off as PTSD for him time in the military.

Or maybe Track is just an ill-raised dick with a drinking and drug problem coupled with anger issues.

Trust me, if those were my parents, I'd be a little pissed off too.

this asswipe had a desk job and never served in battle. the entire palin clan is fulla retards. yes, I went there!

All those POTUS admirers, when they want to point to a perfect example of a dysfunctional family, they won't have to look very far. The job's being done for them!

Just as bright as his mother.

I cannot argue with you, THEY are trash. And this really speaks to Mama and Papa Grizzly Bear as well. But I think there is a screw loose with the eldest cub. There are couple things about him that ring hollow. 1) Why did he join the army? Did he do it because it was the right thing to do, or because he was pushed to do so through a court ordered diversion program stemming from juvenile charges that we wouldn't know about because the files were sealed, or Mama Grizzly called in a political favor? One could argue that he may have PTSD from his service, which could account for his hair trigger temper and his fits of rage and drug and drink problems. But Cookie is thinking that this type of rage issue has been going on for years - to my knowledge, he did not see heavy combat and he was in and out so fast that he wasn't subjected to prolonged battle exposure. But we know he did this. We know that he started a domestic abuse instance and charges and we know that he threw the first punch at that fight that started at a party a few years ago. Normally, I have a lost of sympathy for people with mental health issues, but I think that Todd and Sarah are squarely to blame for raising this monster and they are covering something up. A well balance man does not clean his daddy's clock.

My oh, my. Such an upstanding white trash republican family. Thier mother has done such a fantastic job. BWAAHAHAHAAAHAHAHAAAA!!