a Question of Time 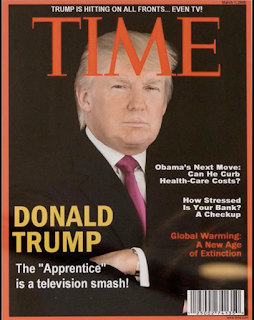 Fake Time covers hanging at your golf courses.  The actual epitome of "fake news".  The one and possibly only thing you seem to be against..........though you perpetuate it at every single turn.

You're wise to label things "fake news". The alternative facts to that are "lies".   ...and it's a dangerous thing to have that thrown back in your face, but I'm calling it out:  You're a Liar.

This is not rhetorical. I truly want to know why.

I get it - if you had one created, I'd almost say "it's whimsical". But no......you purposefully had someone go make multiple and had them have them hang those at your establishments. This really just lends itself to narcissism and an ego to match none.

This isn't a fake mock-up they do at Downtown Disney shop {yes, for the record, I have one of myself as a nun......I kid you not}.  For chrissakes.....you even have the barcode and a publication date.

What I truly do not get - yet I do:  You have been on the cover of Time.  ....and not just because of your candidacy and eventual "win". Hell, for some inexplicable reason, you were their "Person of the Year".

BTW:  Time?   Really?  Has that magazine even been that relevant since say, 1988?  There was no other publication more worthy - like say, Teen Beat, Le Monde or Marie Claire?

I will go on record, if you're gonna pick a Time cover, you should go with my favourite one of you: 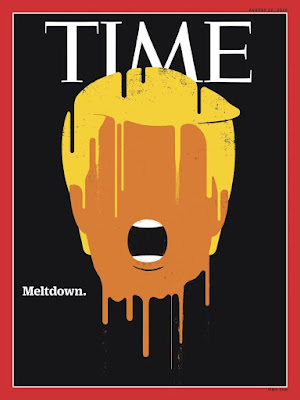 BTW (again), this one isn't fake news. Its harsh reality.

Song by: Depeche Mode
Posted by Blobby at 12:01 AM

I wish I could get my cats to shit on his ugly face. he needs serious psychiatric help; should we send him to dr. spo?