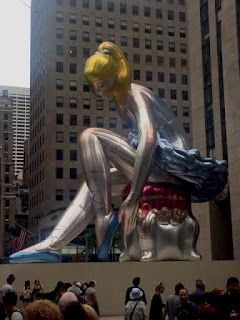 You saw that we did our Broadway adventure. And my pedicure adventure.

As with many of our long weekend trips, we had almost zero planning, as we opted to go about four days before we actually got in the car to leave.

710 had some ideas, well actually most of them, including the plays, though he didn't reveal all of them to me.

In no particular order:

We went to the Cooper Hewitt Smithsonian, which is housed in Andrew Carnegie's mansion. Well, former mansion, I guess. The museum is devoted to design. The tour we tried to take was painful. 20 minutes in, we were still in the first room. We ditched it.

We got there via the newly opened 2nd Avenue subway. We were geeks. We got off at every stop (there are three), so we could see the artwork. I'll post that later. After museum, we walked through Central Park......in the rain, and we didn't mind a bit.

The first day, we walked down to the High Line. Yes, we've seen it before, but the newest (and last?) section opened up since last time we were there. We got there at a good time.....before there lots of people. Afterwards, we hopped on CitiBike and road down to Battery Park. There was one thing in the whole World Trade area left to do:  the new Calatrava subway station.  The job was very well done. 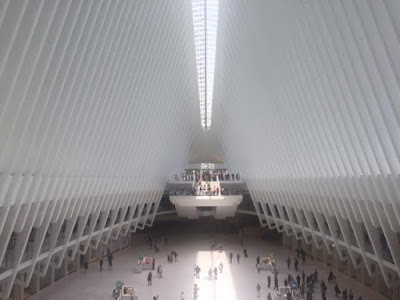 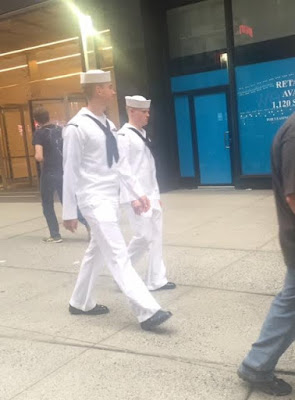 .....until you realize they're all 18 or 19 years old. While some think military boys are hot, I just thought that we send teenagers, who might have fewer opportunities in life, into harms way.


And not because I'm afraid of terrorists, or bad drivers, we attempted to stay away from Time's Square.....though on the way to the play we had to attempt to get that through that hell. But had we not, I would have missed the billboard some guy put up to fuck with his wife. 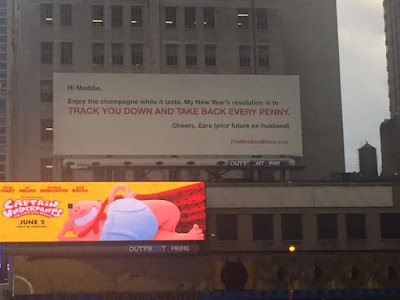 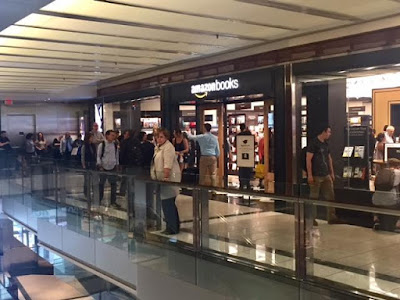 ....oh the sweet irony.  amazon's first brick and mortar bookstore. ...and a line to get in.

We also hit Governor's Island, which is something I've never done.  More on that later.....maybe. Or just click on the link for the drone shots.

We did a lot of walking. I was averaging about 25k steps per day. Had it not been for CitiBike and the subway, it would have been on the order of 35k steps.

Food is a big component to NYC.  Most of what we chose was fair....and sometimes poor choices. We did hit it out of the park with one:  Eataly.  A vast complex filled with commerce and food - fish, pasta, cheese, bread, etc.  We opted to eat at the pasta section.

Months ago, I stopped eating red sauce with pasta. No matter what I made, or bought just wasn't working for me.  The bucatini was beyond good. There was enough that I thought I'd have to leave some behind. As it turns out, I ate it all. 710's cacio d pepa was even better.  I totally recommend this place.  They do not take reservations, but go, and hit the bar. Great wine selection.

We also had a nice dinner with my sister and niece. I talked myself out of going to Eataly for a second night. When I mentioned that, everyone would have been on board. So crap on that.

Unplanned trips like this are good for us. They don't work for everyone. But NYC is like Vegas - you don't need planning for much. There is always something to do.

That was our warm-up. Our big vacation is mid-summer. We are looking for cage-free options for Shep's incarceration during that time.

Oh - the title image is the temporary Jeff Koons installation at Rockefeller Center. I'm not a fan of Koons, but I quite enjoyed this.....and I don't know why.

I totally agree - you don't need a lot of plans in NYC. Thanks for the Eataly recommendation; will have to try it next time. I adore Central Park. The high line was new when I was there last so I'm sure it feels completely different now. LOVE that billboard from the ex-husband!!

I can't believe you didn't see Heathers: The Musical!!!