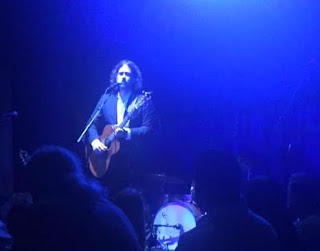 I haven't done the math, but I am guessing, on average we go to a concert maybe once per year.

I do love live music, but it's the other things I loathe - like other people. It took us a full year after the Dixie Chicks to face another group of people.

When it comes to larger venues, I think I'm done done.  I don't care who the act is.....I wouldn't think of going to anything with greater than 2,000 seats.

So I was very excited by the announcement that John Paul White was coming. Assuming (incorrectly) that 710 might say 'no', I purchased the tickets before axing him if he wanted to attend. Even better, it was at a new place in Cleveburgh - which at full capacity might reach 1,000....but probably less.

As it is the Music Box Supper Club, they actually have table food service during the concert. We opted to eat elsewhere before hand and just enjoy the show.  Thank g-d!  While we had to share our assigned table with 4-6 others, I saw no one else in the place eating dinner. That would have been awk-ward!  {yes, say that last word in a gay sing-songy voice.}

White did a great job. The set started off with just him - which I thought the entire things was going to be anyway - but on song three, the additional four musicians showed up for most of the rest of the concert.  I will say, the first band song, the mix was wayyyy off, and the singing was nearly unintelligible. The sound guys eventually cleared that all up.

White only has two albums, plus his Civil Wars stuff.  It is no surprise he doesn't touch the latter - as however that band ended, it didn't sound good, though no one talks about it, though he did allude to his solitude over the last few years since.  He also played nothing from his first solo disk - which left very little.

He did most of his last disk (still stellar material!) and a few covers, including a Dan Seals (not from Seals and Croft, but related to) song, and oddly or not, a version of ELO's "Can't Get it Out of My Head".  The latter song started off extremely well, then got a little weighed down. But by the end of the song, I noticed I was broadly smiling......at the interpretation of the tune.

I'll have to check out more events at places like this. The crowd was manageable and well behaved. Traffic was a breeze.  And it was $18 per ticket!


....but if Mr. White ever comes to your town, shell out the dough. Totally worth it.

there is a place in alexandria VA, the birchmere. food and craft beer and a good show in a place that held maybe 300. spouse and I would go there and see many bands when we lived in the DC area. I do better at intimate places rather than huge concert venues.

Live concerts pretty much a thing of my past. A small venue is a possiblility only for the right artist. Yeah, I've turned into an old fart.