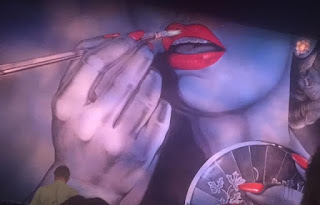 I used to say, seeing Madonna in concert was the gayest things I've ever done. And yes, that includes having sex with men.

When in New York, we had the option for a few Broadway plays.

Not that you'd recall, but my last experience with a musical did not go well. I wasn't really jonesing to go back for more. But I can't help loving dat man of mine {see, a Broadway reference circa 1927).

So what's gayer than Sondheim and Madge?  LuPone. Ebersole. ...in a play about make-up.

Yeah.  You read that right.


War Paint is a musical (!) about Helena Rubenstein and Elizabeth Arden and their make-up companies.

Even on the way into the theater, the burly doorman warned the entering males about the small men's room and go now and not at intermission, because fights break out. Blobby couldn't hold his tongue and said:  "fights? ....at a musical?  ......about make-up?".  The burly doorman laughed.

As a book, I'm guessing War Paint could have been interesting. It was the 30s and here you have two women running - nay, heading - their own multimillion dollar companies. That was fairly unheard of. But how they navigate the times - war, television, etc - and their savvy is kind of a great premise, at least from a business perspective.

But then one adds music and lyrics.

Some review the Playbill references calls it: "an instant classic".

The opening number is just horrid. In theory, shouldn't that be a grab-you kind of moment? It was not.  I like LuPone, but I've never seen her in anything where she doesn't play herself - like Will & Grace or Girls. I'll give her total props for saying on record that Madonna's portrayal of Evita was a "piece of shit".  Still, Patti talking and singing with a Polish accent was distracting......at best.

Still, she has the pipes, even if I don't think she had the best musical material.

Ebersole was on a season or two of SNL, which I vaguely remember. My earliest recollection of her was playing Murphy Brown's non-existent sister in which she was great - hence my remembering her. Most gays will know her from Grey Gardens, because homos seem to be obsessed with Grey Gardens.  She might have had a better voice than LuPone, but the material wasn't much better.

Taking the doorman's advice, Blobby used the little boy's room to tinkle before the performance. 710 took out a small loan to get two glasses of wine. 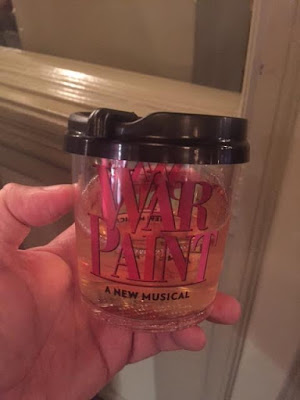 The guys next to us were nice. A woman sitting between us got up and left halfway through.  This, as an appreciator of the arts I get. If it's not good, cut your losses. The Jew in me says, "you left.......at these prices??"  My mind if a very very complicated place to be.

The story of Arden and Rubenstein is partially fictionalized - at least for this play. In real life, though they lived in the same town and were fierce competitors in the same industry, they never met. They handle that slyly at the end.

As it turns out, theater in NYC there is no longer a need to dress up. Save for a few dapper dans, 710 and I were the most dressed-up.....and we had on button downs, dress pants and dress shoes. No tie. No jacket.  But at least we didn't have on ripped jeans and Chucks.....which was the norm.

We had great seats.  Dead center, maybe 12 rows back. 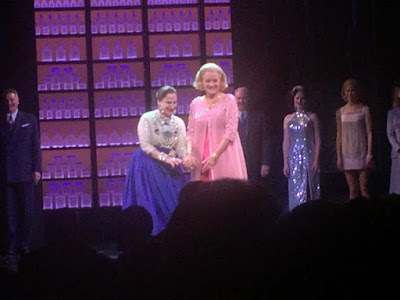 I will say, I endured War Paint better than A Little Night Music, but I think that was just for the talent. Still, one musical play every seven years seems to be about my threshold. So much so, that 710 knew to cut his losses and go see Hello Dolly (with Bette Midler....and David Hyde Pierce....so that was super-duper gay) all on his own the next afternoon.

Had I gone, that would have been the gayest blog entry ever written........at least by me.

Song by: Kelly Clarkson
Posted by Blobby at 12:03 AM

Thank you for leaving me the Gayest blog post ever to write after my attendance at Hello Dolly, with Bette Miller and David Hyde Pierce, in August.

What?? No fancy outfit for the theatre?!?! Glad this show wasn't supposed to be the highlight of your trip. ;-)