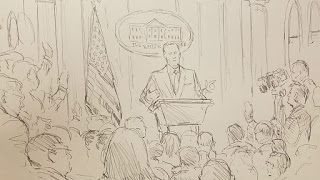 I'll admit it was mildly amusing when CNN had a sketch artist do a drawing at a White House press briefing.

Of course, that amusement turned to disgust - oddly, not at CNN, but with of course, the White House. Then it turned to outrage with the seemingly lack of caring that anyone in this country seems to have regarding the entire banishing of cameras and audio in the press room.

And I don't care if you are conservative or liberal, but this has got to bother the fuck out of everyone....or should. You know the TrumpTards™ wouldn't stand for that shit from a black president.

SCROTUS was so close to propaganda before this, now there is no stopping him. It couldn't and shouldn't be acceptable to anyone from any administration.

And all this bullshit and the throwing around the term 'fake news' by the administration?  Soon there will be no check and balances with information coming from the press secretary to know what is fake or not. Only any - and I do mean ANY - opposition is tagged as 'fake'.

So, Spicer & Co want no cameras or recordings.  Perfect.

Are you listening new organizations?  Here is the plan:

Do it for 30 days  - the same time it takes to defeat ISIS. I can guarantee you, they'll allow cameras back in to discount the truly made up news. If there is not video or audio to discount what the press reports, you can't call it a lie.

See - that nothing on record works both ways.

I don't know why I have to come up with solutions to everything.  It. Is. Exhausting.  I mean, I already have a full time job.

Brilliant! Melanianoma's dick is bigger than the president's. This might be actually true.