The tweets were unfortunate.  They were rude. 95% chance they're not accurate or true at all. 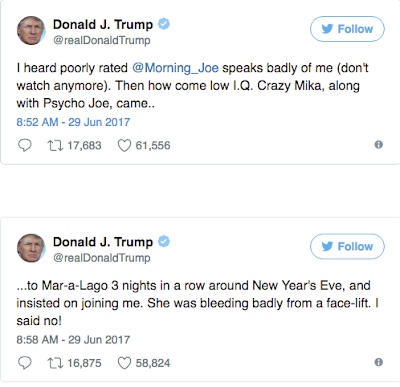 Were they "one of the most vitriolic insults", as NPR stated?  Not even close.


Here is what they are:   a distraction from something else that is going on.

Are they a shiny object to steer you aways from what "they" are doing or planning?  Most likely.

That seems to be their M.O. :   send crazy tweets or have Twat Conway open her ugly pie-hole on camera.......and then watch people react and miss the real story, whatever that might be.

I mean are any of us surprised or shocked by this display or his written word? I didn't even raise an eyebrow and I have no idea who this chick even is.  The things is:  now Morning Joe will get a boost in the ratings and in a few days SCROTUS will take credit for it.


Of course, my question of this whole thing?    I want to know why it took 6 minutes between twats.  Surely it can't take him that long to type out a text.....unless he's using his Nokia Razor.

But seriously, between all the TV he "doesn't watch" and twatting.....when does he have time to govern?   Ohhhhhhhhhhh........right.  Answered my own question.

and melanoma the stepford wife defended her husband's shit. SAD!

someone needs to take away the baby's pacifier (cell phone).

I always wanted to refer to the 'lovely' Mel as a skin tumour just like W.Q. has done, but I didn't dare as I thought it might be stooping too low. Now I see that it wasn't too low at all. Hooray!

But it's worse than grab em by the pussy?!

Since there seems to be so much "squirrel" pointing & screaming going on, I picked myself up a t-shirt with a squirrel on the front of it. Just my way of throwing shade.