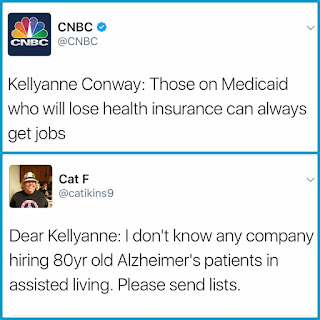 Hooray for the Delay.

Of course, not bringing the healthcare bill up for a vote isn't a loss in the GOP's mind. You can't lose on a vote that didn't happen.

But let's be honest you McConnell asslickers - it's a loss.

The Elephants in DC don't really operate in reality though. Take Kelleyanne's quote.

The thing is - they're stupid, but they're not stupid. My mind goes to "ulterior motive" and what that might be in this case.

@catkins9 has it partially wrong, of course. Conway might provide said list of companies, but he forgot the qualifier:  companies who have employer-sponsored health benefits.

As it stands now, with the Senate version of the health bill, 2 millions folks who currently have those will lose those benefits.

My take on KY Mitch is that he was racing the ACHA into a vote before the CBO came out with their numbers on much more it would cost than the ACA and how many more would lose coverage. That did not work in his favour.

Ohio's continual pussy senator, Rob Portman, opted to step-away from the current version.........nine hours after it was already decided it would not come up for a vote. He's a bigger pussy than his gay son.  Someone should really consider doing a spinal implant on the "man".

Now McConnell & Co will actually have to chat with the other 87 senators who weren't in that backroom making up this shit-tasterous package. ....it was the one thing they truly didn't want to do. And now they don't just have to convince some of the democrats, but up to 10 of their own.

smellyanne can suck my balls. and the turtle is a weak spineless LOSER, as is this entire dictatorship. my 2 senators - one is for, one is against this bill.