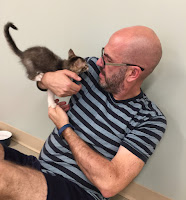 .
I haven't really written about yoga lately.  Mostly, I haven't been doing it as much....skipping here and there, body parts in pain most of the time making me want to skip here and there.

In my Facebook feed, I "liked" Rescue Village, which is where we got both Sophie and Shep.  So in that said feed, I got a notice for 'Cats on Mats.

I was not anticipating a rigorous practice. I will admit, I had visions of kittens climbing all over me as I did a down dog. Alas it was not meant to be.

There were three kittens, all from the same litter. Part of the reason for this activity is to socialize the kittens to humans. So when we arrived, they were hiding out in a corner in some of their play toy houses.

As we got going in our practice, so did the three. But not with us so much, but with each other. There was a lot of chasing and tackling. One of the three was very very vocal.........it made me smile.

Eventually, some of the folks got some kitty-time. 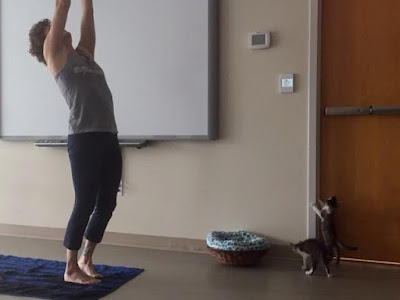 The one doing his (I'm assuming it was a 'he') is Sun A was the vocal one....and the most social one too. It's also the one I'm holding in the title image. 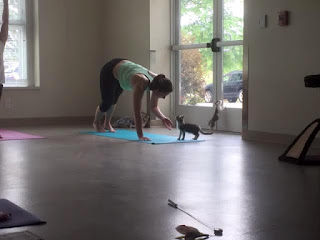 These little guys were checking out the women....and the great outdoors.


It was then I felt a little bad for the fellas.  Them running around and chasing each other - they cannot do in their cages. Though they do have windows in the kitten room.

As you can see, I did stop to play with some of them.  In a way, I'd love to have another kitten, but I'm 99.6% sure it's for the best that we do not right now, though I'm sure any one of them could put Shep in his place.

Anyway - it was a fun experiment, but I don't think I'll be going to the other two events.

I couldn't even attempt doing a 'Mindfulness of Breathing' with those three distractors taking over one's attention so completely. If I'd gone there with a jacket containing at least three capacious fasten-down pockets there'd be no question of returning home alone.

That would be fun.

Its a fun idea!