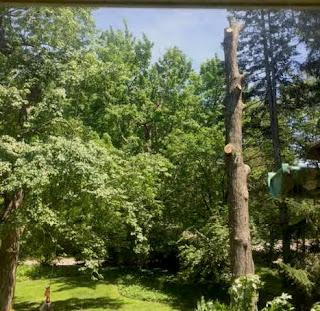 Thrice we've tried this season to have some trees taken down. Thrice we had been thwarted.

Until this last Friday, that is.

Soggy weather and a soggier lawn stopped earlier attempts. I'd hate to see how bad the lawn would have looked after that  - as it doesn't look so good now.

You can put down wood and whatever for the cranes and such to roll over, but you're still talking 10 tons of equipment trampling your yard.

Trees are fucking expensive to remove, yet 710 was worried about some of the dead ones on the hill. I get the concern:  if they fell, it would be out on the road, and we'd be liable should it have killed someone.

Oh the irony. As many schmucks that have run off the road into those trees, and yet here we are (again) footing the bill. It really grinds my gears.

I will say, 710 made a very good deal. A negotiated price to take down as many trees as they could in a full work day. The last three we had taken down was 13+ year ago and that set us back $1,100 minus the stump grinding. So while I won't tell you what we paid this time, if you even didn't factor in 13 years of inflation, it came out to only a few hundred dollars per tree.

710 worked from home to supervise. Shep barked at the workers. So I hear.

So, all but two of the trees they took down were dead - and were on the hill. I don't even truly notice they did a thing - which also grinds my gears. 710 says it lets in more light.  yeah yeah.

The other two, well.....big ass maples. One that at the base you could see through. One arborist told me 'not to worry' about it. One said it had critters living in it and needed to be taken down as it was rotted inside. I found it hard not to agree with part of that, as I could see daylight through the trunk.

I'm not sure what was wrong with the other maple, but it's gone too. Well partially.  They didn't quite get it all, so they'll come back and finish.

My takeaway from all this is that I'll have about 144,000 less leaves to rake / blow / bag this upcoming autumn....and from the two trees who held onto its leaves the longest.

Song by: Patty Loveless
Posted by Blobby at 12:01 AM