CALL ME 'MRS. BIRDSEYE' - THE SHOW IS FROZEN! 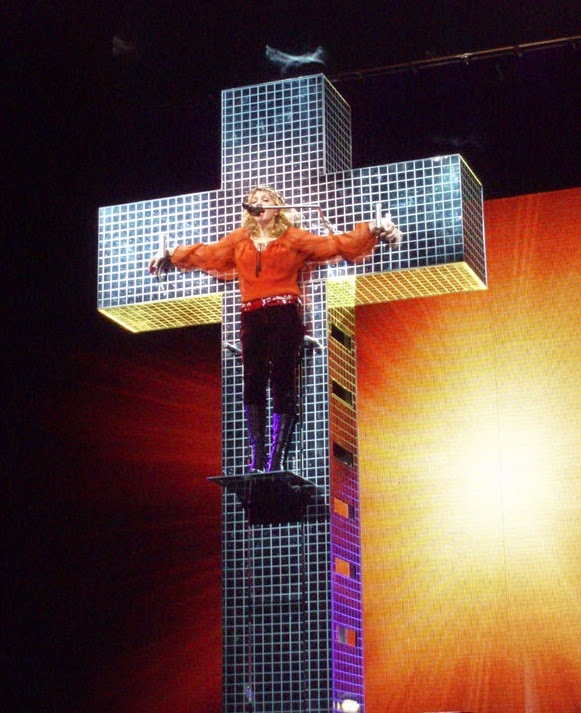 So, our last night in NYC we went to see Madonna and her Confessions on a Dance Floor Tour.

Yes, Morty and Dith are right now going, "noooooo!!! my eyes! MY EYES!" ....which is exactly why they were never ever considered in the first place to see her with us. They can thank me later.

We had the chance to go - and we took it. I've never seen her live* before so really didn't know how it would all go down. I had heard that she had been starting almost an hour late and insisted that the AC in the arenas be turned off as to not hurt her voice. Considering that NYC had been experiencing 100 degree days and we had the absolute top row, it presented no problem whatsoever.

It twas a tad warm.

That being said - what a frickin' spectacle!!

That is not to say it wasn't entertaining - it was. There was a lot to take in. You could easily be watching something else on stage and miss where she went and how she got there. Having never seen Cher (nor ever wanting to), this is what I consider the gayest thing I've ever done (shut up!). I assume it was something like Cher mixed w/Cirque du Soleil. The entire production was about two steps away from being a semi-permanent Vegas show (exhibited mostly in that horrible song 'La Isla Bonita' from two decades ago!). Maybe the songs would have meant more had I really ever listened to her last disk - which comprised of most of the concert. I will say - the songs 'Jump' and 'Get Together' seemed to stand out for me.

Her little mirrored crucifix was smirky - but hasn't she run that catholic thing into the ground eons ago? Does she even identify as catholic anymore? And let me tell you right now, Jesus didn't have an elevator to get off his cross - and he didn't do it in Prada footwear (I'm guessing!). But it was the first time I've heard anyone clap along w/a cantor! Sorry - but she can't (shouldn't be allowed to) co-op every religion.

David and Duck went with us - and poor poor Duck. He was a trooper and said he enjoyed the concert, but personally, I think he was morty-fied. The entire things was scripted out to the last comma - save maybe one comment on playing New York and it lasted 2hrs to the minute (yes, Duck and I both checked our watches).

I wondered aloud to Denton at the concert - 'what do they do w/all this shit when the tour is over?'.

Part of the video montages are oh-so political, but Madge is hardly one to rally against Shrub (though everyone should). If we all think that the GOP et al are elitist snobs, you might want to check out 'Madonna By the Numbers' below. Finding this on-line wasn't all the hard - and trust me, it is only a fraction of what they break down. Excessive doesn't' even begin to cover it (i.e. mink & diamond eyelashes?). And is there anyone who believes the part about her not wearing 'foundation'? Yeah - I didn't think so.

All that being said - I admit I had a good time. I'll never see something like this again.

I will also say - getting out of Madison Square Garden from the the upper deck is horrid. Egress in MSG sucks. Unlike many arenas, MSG doesn't run their escalators downward - not that it would have mattered. We ended up taking the stairs. Oy. A sea of people and all going nowhere. David said something about 'what if there was a fire....' which was just a nice way of saying what we were all thinking (I confirmed later): 'this is what I'm guessing the North Tower' probably looked like'.

*Live is a term meant to convey living/breathing, not necessarily actual singing - as at least some background vocals were pre-recorded.
Posted by Blobby at 12:28 AM

So you weren't close enough to actually confirm the minkness of the eyelashes???

Call me frugal, but my chinchilla lashes work just fine.

Call me shallow and GAY GAY GAY but I had a blast! It was indeed VERY hot, and the show was totally out of the realm of reality, but I loved it.

Maybe it's because I was closest to the ladies room (right behind our seats) and was drugged by the fumes....

THANK YOU BLOBBY for coming to NYC!!!

Not close enough to see the mink eyelashes - no.

And I only counted 3942 crystals on her belt - but w/all the twirling and dancing, I guess I could have miscounted.

...and David, we had a blast too...at the concert and w/you and Duck (even though you didn't discount my theory that the concert mortified him)

He had a great time too, he just did not want to move through the whole concert because it was so hot.

Nothing ever felt so good as getting rained on after it was over!