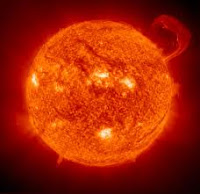 Denton would always bug me (in a loving way, of course) by saying, "Man, that sun sure is hot!". It got to the point I had to ask Jeeves hot it actually was.

Turns out it is 5800 Kelvin. With my limited astrophysics and astronomy background, I had to find a way to convert that (which would be 9980 degrees F on the surface - THANK YOU!). I know core is hotter, supposedly 14 million degrees (it doesn't say F or C and when it's that warm, does it matter which one it might be?) .....but really, who is going to the core? Fuck - who is going to the surface?

Well, there is part of my schtick (yes, it's true - I have schtick!) that I still hold over from the Gong Show. It's the Unknown Comics bit about the first man to land on the sun. ..where he jumps around going, 'OOH! AAH! OUCH!' ahhhh....it never gets old.

So now Denton says to bug me (in a loving way, of course), "Boy - that sun sure is bright!" I just haven't bothered to figure out how many lumins that might be! And even if I did - how does that convert to anything???


Song by: Katrina and the Waves
Posted by Blobby at 10:36 AM