Billy and the Gun 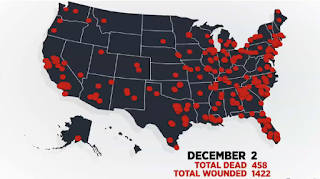 I am still hung up on the latest shootings in California.

I would kind of hope we would all still be hung up on them. ....but some folks are more worried about one the Kardashians posing in a wheelchair or some such thing.

Yes, I've heard some details of the shooting, but I can't imagine what would be beneficial to dig into all of them.

I am more interested in the numbers. Yes - imagine that. Me, with numbers.

Yesterday, I dropped the 355. Sen. Dick Durbin says 352. Rolling Stone says 458. I don't know what databank anyone is using - or which number is correct.

Rolling Stone takes it further than the deadly vital statistics, and counts the wounded as well. I'll assume it is the physically wounded and not the emotionally or psychological walking wounded.

I got exactly what I expected from the "leaders" of this country - mostly Paul Ryan with this "the GOP move on any new gun regulations................including for suspected terrorists who are already on no-fly lists.

I gotta hand it to those douches, when they dig in their heels, those Jimmy Choos get dug in but good.

Of course, the GOP also planning on trying to repeal Obamacare............for the 54th time!!!!   I do believe if there is a picture in the dictionary for 'sore loser' - Mitch McConnell's face must be attached.

There has been a few rays of sunshine in the last few days too. Oddly, this one came out a few weeks before California or Planned Parenthood.

I know of Wendell Pierce - as an actor - but he had an actual great idea that he put into a Tweet.

But back to reality and keeping the violence alive - where it should be and not swept away under the carpet......again.....here is the Dick Durbin graphic on the 2015 shooting videos.


There have been over 350 mass shootings this year – more than one per day. It has to stop.
Posted by Senator Dick Durbin on Wednesday, December 2, 2015

That Tweet is perfection ... and I'm sure it's sending shivers down the spines of so many asshats.

I plan to write my elected officials and encourage everyone else to do the same, demanding they stand up to the NRA and take action on sensible gun laws.