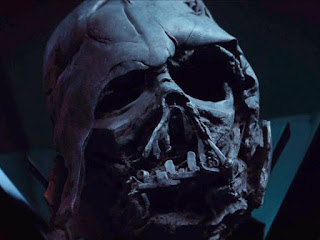 You've probably never heard of it. That's why I'm here - to help inform you.

I gotta say - it was great. But let's keep that 'great' in context too.

(this is an updated review (if you read this blog between 12mn and 8a EDT) - as I probably should have given myself a few hours after seeing the movie to gestate my thoughts into my post.)

Fisher-Ford-Hamill were hardly the best trained actors of their / our time. And Portman - McGregor - L. Jackson had their acting life sucked dry by George Lucas himself (though McGregor was the strongest of that trio).

I am not here to provide spoilers and will try not to do so. However, if you are planning on seeing the movie, you might want to come back to this after you've viewed the film.

This was a well done cast, even with the inclusion of the original three. Fisher was more than passable, Hamill too. Ford is Ford. Trying to hard to be gruff and sometimes too over the top with that act. He's Indiana Jones in a vest. He's fine, but you've seen it before.....and often.

No, the new cast members excel. Oscar Isaac, John Boyega and Daisy Ridley are great. All of them, maybe especially Ridley. Adam Driver is just fine too, but he looks odd to me without facial hair. And this was the third movie this year I've seen Bill Weasley Domhnall Gleeson in....and one he was in with Isaac.

Sure, as the story goes, everything old is new again, but it was just so well done, you don't matter that much.

Episode VII builds upon the supposed myth of the Jedi, as it is set decades later. The Dark Side still exists, as does the Rebellion, though the new Empire is a little more like Germany circa 1939. There is still a weapon of mass destruction that needs to be eliminated. There is even a weakness to said weapon, though it's not an exhaust port.

That said, when you get to the heart of it, I feel J.J. Abrams throws more than a wink and a nod to the original episode - now called A New Hope.  If I'm not mistaken - and I really am not - he even throws in actual lines from the first movie. Or movies, as J.J. kind of brings too much of the first two movies into one, instead of creating a lot of original material.

There is even a cantina scene. The new place is cleaner and the music is better.

Like Episode IV, there isn't a lot of back story to the newer characters, so things are left to your imagination - like who was Max von Sydow supposed to be, and why was he supposed to hide?  like - why was it such a big deal to say Lupita Nyong'o is in this film, when she is pretty much a voice for a character who is the galactic Edna Mode (though I thoroughly liked her character).  Who is Rey's family.....though one can and does make assumptions?

With the Force Awakens, there is a little more believability with some of the action scenes. New people handling a lightsaber without really knowing what they are doing. The Stormtroopers actually hit and kill people....and there is actual blood. The violence, while not extremely violent, isn't totally sanitized like it used to be.

Both 710 and I thought they incorporated the original characters in a good way and in a fairly organic manner - and not bombarded them.

And while he is not credited, Daniel Craig plays a stormtrooper. For folks looking for him, he's in a holding cell that contains Rey, the new female character.

I did get a laugh after the movie when our friend James asked why they never discussed why Luke's hand looked the way it did. I was confused, until upon further discussion to find out he had never seen the Empire Strikes Back.

The theater, as you'd expect, was filled. We saw it in 3DXD and some of the 3-D scenes were extremely well done - like an Imperial Cruiser coming right out of the screen.

In the lobby they sold Star Wars related 3-D glasses. I tried them all on, and while I liked the white Stormtrooper-ish googles the best, they didn't provide a great view when you had to put them over my existing glasses.

Sure I could have used the free ones that came with the movie, but no......I went like this.... 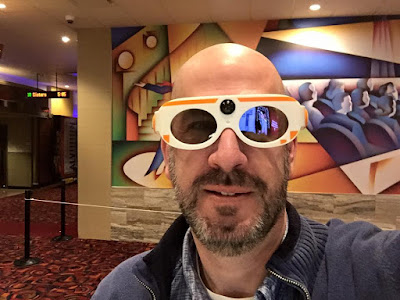 Abrams did a good job - if not an original one, as I had higher hopes than a reboot. The cast did a good job. The special effects were good. The movie was good, though I won't say it was the best movie of the year.

Song by: Lucinda Williams
Posted by Blobby at 12:03 AM

Raybeard said...
This comment has been removed by the author.
1:49 AM EST

It had jolly well better be 'great'! I'm intending to go tomorrow, though with no enthusiasm at all. Only going 'cos I've seen all the other S.W.s - for reason of 'completeness'. In just about all of them I've only been prevented from dropping off by the infernal din on screen. Tomorrow I'll be loading a lot of caffeine inside beforehand, just in case.
However, having said that, majority opinion so far seems to concur with yours. So let's just go and get the darn thing over with!

Oscar Isaac.
That's the only reason I'll see it.

I'll go see it out of nostalgia.

Better than Carrie on GMA/Today?

No was was General Leia better than Carrie Fisher on GMA.

Now that I have your # for texting, it is this photo that appears when you do text. I am quite glad to have it as you look so happy !

The Husbear FINALLY dragged me to the movie theatre to see it this past weekend. It wasn't bad, and I'm looking forward to seeing some of the questions that were raised get answered.