Let's just say for a free version of the app, Word Chums, you've probably paid too much.

I suppose I could leave my review at that, but what does that actually get you?

A neighbor, with whom I used to play Words with Friends, for some g-d knows reasons switched to Word Chums and encouraged me to play this game with her.

She's in her sixties, not her teens, so I am confused as to why she wants to play a lesser WWF version that looks like it was developed by someone who throws up a truckload of Skittles on a regular basis.

So as you might have guessed, Word Chums is similar to Words with Friends. 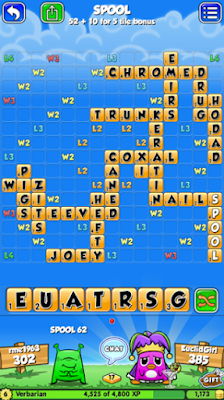 There are a few differences, of course - only one of them that I can tell is a good one.

First, you have to create an avatar. How very Yahoo.....1994. You can't see mine clearly, as my cycloptic (that's a word, right?) eye is closed. And the avatars react when you score a good word - by jumping up and down and the other one frowning. It must have taken minutes for the programmers to come up with that jewel.

The lag time from hitting 'play' for a word to it calculating the score seems to take forever. That just annoys me. And that where you'd normally hit 'play' is now 'chat', so more times often than not, I waste time opening a dialogue box, only to have to close it and then submit your word.

For the improvements over WWF, there are two. One is that the tiles turn green when you've created a word that works. This eliminates the trial and error when you have crappy letters and you try to make words that might exist, but of which you are unaware actually do exist.

The other improvement is, you can hit 'bomb' and swap out all your letters and not lose a turn. In WWF, you lose give up your turn if you swap out any letter.  The caveat here is, you have to swap out ALL your letters. If you only swap out one or two, I believe you lose your turn.

Still, the look of the app just bugs me. It's all very childish.