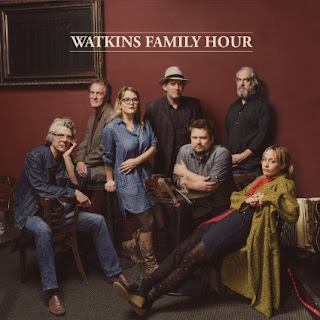 This month I am going with the Watkins Family Hour and their self-titled debut album.

They are and aren't a real group. Sara and Sean Watkins are brother and sister who play in Nickel Creek, as well as do their own solo stuff. But for years, they've been playing monthly in a Los Angeles club with an on and off group of musicians - though mostly they've consisted of Fiona Apple (I know, right?), Benmont Tench (from the Heartbreakers) and some fairly well known session musicians (well, well-known if you're a geek like me, I guess).

Earlier this year, they took three days and recorded an album.

The songs are covers. Nothing original - except maybe in the way they perform them. But that is what they've been doing on stage for all these years - just playing music that they like and admire. Nothing more than musical friendship. The songs and the album is fine - better than fine, even.

The problem is I want it to be 'more'.

The concept is great. Even the execution is fine - as they are all expert musicians, but I feel I'd probably like this whole set-up more in a live setting than in a studio. Some of it translates to studio, I'm going out on a limb to say other aspects

I like Nickel Creek. I like their harmonies. But those are needed when Sara Watkins takes lead vocals, as she does with a lot of these songs. She has a fine voice, though she can tend to sound too similar song-to-song. It is what builds around her that make the songs interesting.

Nickel Creek likes to play Lindsey Buckingham songs in concert from Fleetwood Mac's Tusk. I was never sure who was the fan of this, but the WFH (as I will just call them from here on out) single out another Buckingham song from Macs Say You Will disk: "Steal Your Heart Away".

Again - it's all fine. But leaves me wanting more.

I really like "Steal your Heart Away". I like "Early Morning Rain". But I think the standout is the mostly-Apple lead, "Where I Ought to Be".

It's with that last mentioned song where I wanted this disk to go - more shared vocals, more partnership. It is what I imagine the live performance to encompass (though I've never been to one).

Still, the Watkins Family Hour is a solid disk, and an unusual one in this musical world of sampling, auto-tune and all around splicing together separate bits of music to make one song.
Posted by Blobby at 12:07 AM