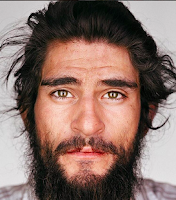 It is December - 'tis the season and all. Unless you're Starbucks, of course.

I kid. I kid.  I'm all behind Starbucks on their "cup situation" - as if reindeer and ornaments on coffee containers have anything to do with the birth of Jesus Christ.  .....but I digress.

There was no SotM for November. Actually, no Shopping with Blobby or App of the Month either. I had too much going on, I suppose. I'll rectify that today with an early SotM.

I have an Instagram account, but I can't say I use it a lot. I have less than two dozen pictures attached to it. I follow friends - and only about two dozen of those as well. I don't and won't follow 'celebrities', because......well.........why bother?

But a friend of mine - real and virtual - has been following on Instagram, the Greater West Hollywood Food Coalition (GWHFC).

You can take all of Kim Kowdashian's selfies she posts to Instagram in clothes three sizes too small (ok, the clothes are the right size, she is too large for them) and cram them up her big old bee-hind.

GWHFC is a cross between a marketing concept for the center itself and Humans of New York.

They will highlight volunteers and workers for GWHFC, but also some stories of the homeless, hungry and needy that they serve.

In a time when Christians get bent out of shape over a coffee cup, most of those harpies would be caught dead before actually helping out an actual human.

It is actually a good thing to put a face and a story to human suffering. We all have our own hardships and our own stories. Many of them are worse than the ones we carry around.

I only picked GWHFC because it was brought to my attention. No doubt there are other similar agencies doing similar work in your neck of the woods. Maybe they're not social media savvy.

You'll find that at this time of year, shelters and food kitchens will say they don't need help. They do - but not to hand out food. They need food. They need money to stay open. They don't always need helping hands to distribute a bowl or plate of food.

But maybe, what these places can use are people who are web savvy - who can market their need, their stories. We all have different strengths to provide to the underserved.....even if it is just documenting their experience.
Posted by Blobby at 12:09 AM