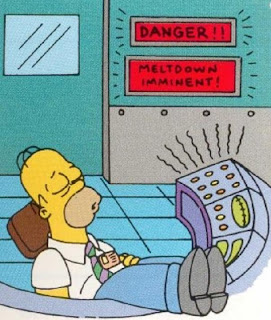 "Lisa, if you don't like your job you don't strike, you just go in every day and do it really half-assed - that's the American way."


Homer know more about the American work force than most of us would care to believe.

I know I said I wouldn't blog about work - and technically I am not. Not about my work; my job. Not exactly.

Yes, the presentations were boring. Yes, the ice breakers were tedious, considering I will never ever ever seen any of these people again, and two of the women sitting next to me were vile human beings, considering they are considered "caregivers". You'd hate to have them taking care of you or a family member, that's for sure.

But it was really on day two where I just wanted to stand up and scream: "SHUT UP".   ...to the presenter and the participants.

The presenter really needed to refine his shit. But some of the folks who were hired........man! I mean, I'm not sure why they wanted jobs in the first place.

There is zero exaggeration, when I'd say a dozen of them only wanted to know about FMLA and when could they get it (!), or EAP and could folks there prescribe things, and what is the organization's attendance policy - - - and my favourite, "if I get fired for tardiness or attendance, how soon can I reapply to get hired?".  That was a direct quote. Hand to g-d!

O.M.G.  These people hadn't even clocked in once yet and they're already assuming knew they'll be fired for their shitty attendance record. They thought being allowed to swipe in six minutes late wasn't good enough. I agree - just in a different manner. If you're scheduled to work at 08:00, you had best be swiped in and at your desk by 08:00.....not swiping in and then walking to your work area after the fact.

Of course, they are the same ones bitching about the parking garage they were assigned (the same one I'm in) and that is is a THREE minute walk to the building.  Three. Fucking. Minutes.  Well, assuming you're not a lazy lardass with attendance issues.

Well good luck with that honey (yes, every single complainer about parking or attendance was female), considering the only attached parking garages are for patients only.

They'll be gone by February. It just fucking amazes me that people are like this. I'm sure some of my former employees, and current ones too, have this attitude. I just have layers of people between me that I rarely deal with ones like these on a day to day basis.

Honestly, it was depressing to listen to.

Almost as depressing was the "educational" video on workplace violence.

Sure I have worked for a big organizations before, but have not been in an office for a long time. If these last years has taught us anything is that they times they are a-changin'.  Something's blowin' in the wind.

Mostly madmen with guns. Seeing a video about a shooter entering a building and taking out people was quite..........odd........and graphic. And it's on Youtube.

I would say, I was more surprised by the actions they say a worker should take. Not so much the 'Run' or 'Hide' - as I'd run like Bruce Jenner and hide like Caitlyn's penis - but the 'Fight'. I guess a fight or flight instinct kicks in during these situations. But what is the corporation's liability to having the employees fight back against an armed shooter? Chances are, it is only ending badly for the worker.

I don't play video games and I normally stay away from violent movies, so I gotta say, I was a little surprised at this. Unfortunately, it's the new reality.

Honest to g-d, I thought of it all too during the organization's holiday party the next day. Allowing thousands of folks to get food in an atrium, all surrounded by armed guards who blocked access to non-employees.

It's the new normal.

Song by: Nickel Creek
Posted by Blobby at 12:03 AM

OMB! that's the exceptional murrican attitude toward work from those bitches! gimme gimme gimme. don't wanna work for it. might as well write THEM off immediately - fire, do not rehire. waste of company time. no work ethics any more.

Is there room for me to hide under my desk where I can't be seen by someone walking by? That is a better question, then what if I am late all the time.

I work for a wonderful manager who says, I don't car when you get here or when you leave, get your job done and I will sign your time sheet no matter what it says. I like him, it helps that we are nearly all salaried and time sheets are a great work of fiction anyway.

We were just having the "no one has a good work ethic" conversation at my job yesterday.
It amazes me how lazy some of us have become, how entitled, spoiled and petty and lazy and stupid and and and ....

Once upon a lifetime ago I worked in healthcare for 20 years myself. It's amazing how so many of my coworkers spent all their time "working" the system. I observed it was their "working" the system that made their lives so miserable. Alas they couldn't see that. For example: we had a PTO system combining sick, vacation and holiday time. Many were just amazed at all the vacations I took and mad because they didn't ever have enough PTO time to take one. Hello, stop calling in sick every time you bank up eight freakin hours.

Is it wrong that I found the "gunman" kinda hot?

I once worked in an office for a public utility. All management left at 5pm but a handful of us were forced to work the 3pm to 11pm shift. Nearly everyone took advantage of the fact that no managers were around. I got sick of doing all the work while they painted their nails, talked on personal phone calls for hours, and took extended dinner breaks, so I finally told the managers what was happening. I was not thanked for reporting the abuses of my colleagues. Instead I was criticized by the manager for "tattling" on my colleagues! I couldn't believe my ears. So I decided to goof off like my colleagues for a week or 2 to see if anyone noticed the drop in productivity. They did, and asked for volunteers to work overtime (at time and half) to get the work done. In this case the management encouraged the laziness and wastefulness of its employees. I soon transfered out of the dept.