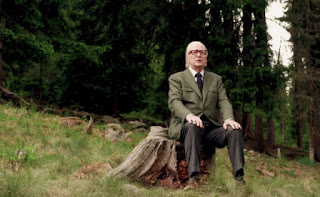 It can be amusing when you read about movies you've seen after seeing them.

I rarely read reviews ahead of time, though now and then it's hard not to see their star rating or their grade. Normally we choose our movies from previews......and sometimes word of mouth.

That can be a risky gamble.

Such as it was with Youth, which we saw xmas afternoon.

The previews made it seem like an interesting story.......and to a degree, it was. If PR is to be believed, the movie was conceived and written specifically for its star, Michael "send me the script, I'll do it!" Caine.

Caine, Harvey Keitel, Rachel Weisz, Shia LaBeouf Paul Dano and a brief appearance by Jane Fonda - who probably really looks like this in real life - all do a decent job with what they're handed.

Still the director makes the movie arty for arts sake. A few really cool shots, and one Lynch-ian scene, that really do nothing to add to the story at all. And some are more than just visual shots, but little scenes that are indicative of squat.

I take it the shots of so many female boobies is to wrap it all back to 'youth'......even if they're showing the old sagging ones.

The title is just kind of hanging out there - it's not that anyone is actually outwardly pining for their own youth, but for each character, I suppose, they made their career or life (and possible missteps) in their own youth and now they are here at Switzerland resort (some great shots, btw), contemplating those missteps or how and if anyone look beyond their seemingly defining accomplishments.

As much as I like him, Caine is Caine. There is no huge deviation of his acting ability or seemingly becoming another character from say - any of his other movies. I like Keitel. I can't say I was ever a fan of his before. And honestly, for the first half of the movie I though Dano was LaBeiouf.

The monologues however, belong to the women. Weisz has a great scene with longest length of script. Fonda might have the second.

Scenes, shots, storylines are almost non-linear. Again more art for arts sake than to tell any kind of actual narrative. It's almost as if there is a plot, but no actual story.  In ways it works. In ways it does not.

Admittedly, I got to the theater a little drunk, as I had two too many mimosas at a holiday morning get together at our neighbors. And while we were the youngest in the theater, I was the only one who had to get up and pee. 710 said my liquid intake wouldn't be an issue because the movie wouldn't be as long as Star Wars - but it was!  Two hours, plus.

As for those reviews - well, I reviewed them after. Some gave the movie and A+. More gave it a B. Or the Variety article which said that audiences at Cannes loudly booed the film....but they're French, so what do they know?

I really wanted to see this. It's been out here a little while now but is being given only a very limited release, so far to none of my locally reachable screens, but I'm watching out for it in the 'Coming Soons'.
I agree that Caine's acting range abilities are not very impressive, and any accent he attempts other than his own Cockney is just laughable. Nevertheless I do always find him a compelling screen presence - even if it's in a stinker of a film, and he's certainly made a few of those in his time. Anyway, what you say about 'Youth' intrigues me more. Hope I get to see it.

Frankly, I am impressed that anyone pays money to see a Michael Caine movie.

Yikes... from your review it doesn't sound interesting at all. Old actors and boobies??? No thank you.