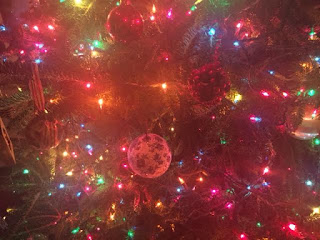 However, I called her yesterday, as it would have been my father's 95th.....you know, had he lived.

As the "holidays" go, we are as ready as we are ever going to be.  What presents there are have been purchased.....though not wrapped, at least not mine.

And we will have to take an appetizer to my mother's tonight - as it's really just appetizers and desserts on this night. But I'm letting 710 take the lead on this one. I'm happy to make whatever he chooses as our option, but I'm out of creative ideas.

We actually will have some plans for our normal lazy 25th. Oh, sure, we'll laze in the morning, but we have an invite to a neighbors for bagels and mimosas in the late morning. And then of course, Chinese with David and his wife.

But until we get to that point, I "get" to endure my sisters and their broods for an evening.

I will be bringing beer.

Since I'm new at the job, I technically do not have today off, but I'll be leaving early. Sneaking out, if you will. No one has been around most of the week, and even more people are off tomorrow - so no one will even know I'm there, let alone gone.

As it is, I spent the last two days doing a few emails, but mostly doing my on-line compliance training.

I suppose one of us will have to run out and get Petey something special to open on Friday. Sophie won't care a bit about anything, but Petey seemed to love a cat toy that was at my sister's house.

For tonight, I am still hoping we are home by 21:00.  We won't take Petey tonight. Too many people. Too much food.  Too much havoc for a puppy.

Call it El Niño. Call it Global Warming. Call it Climate Change. It's freaky. But whatever it is, you can't call it a white christmas.

Merry Christmas to you and yours!

We do Lazy Christmas, too, though we're extra-lazy ... just me, Carlos and the kids [BTW I sent some photos to you].

Merry Christmas to you, 710, Petey and Sophie!

what sort of beer?

What a coincidence: Spouse's mom's birthday is also 12/24. She is now 86, so 1 year younger than your mom. For her birthday we usually have appetizers and desserts too, although this year the food got a little 'heavier'.