Don't Touch Me There 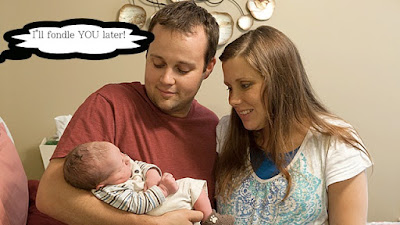 What can I possibly say about the Duggar mess - well the part about incest, as their entire family is a mess - that hasn't been said?

I guess the biggest takeaway is that for a lengthy period of time, people can keep a secret.

The Duggars (what - there are about 1,382 in the immediate family?), the police, the DA, an Arkansas trooper (who is now serving a 56 year prison term for child pornography), church elders, the head of Hobby Lobby, who also 'helped' the family.

All of them, keeping their traps shut for Jesus.

I love how one hears that Josh Duggar was counseled for his behaviour.

I hear squat that his sisters (and other victim(s)), got any kind of therapy. But....to be fair, they're girls and don't really count.


But the joke is as funny as the Duggars themselves. Sanctimonious bastards - calling for death to child molesters in the past. Just not their son, of course.

Oh - and while it's not said, they don't really mean straight child molesters. They mean the ones that are men who prey on boys.

A pedophile with three children of his own.....and no doubt 174 nieces and nephews to sate his never ending ravenous appetite for young, nubile flesh.

What?  Am I being unfair here?

You mean - like how the Duggars and their supporters act not using full facts when denouncing people, practices or other ways of life than their pseudo semi cult of sister-wives?  And a buttload of unfortunate hairdos and dress styles for the women?

Hmmm....maybe they don't have a gay in their midst after all.

In all seriousness though - not that there isn't truth in humour - this isn't more (or less) fucked up than other stories out there. They just happen to have gotten caught. They just happen to be, for lack of a better term, media figures. But like most of them, they are hypocrites to the Nth degree.

I love the candidates who have sidled up to Josh and his family. I love more the way Mike Huckabee has doubled-down on his support for a self-admitted pedophile. It's not like his candidacy was really viable anyways, but way to shoot yourself in the foot.

But Mike isn't one to talk about how to raise kids, when his son tortured and killed a dog for fun. Though Mike says, 'EVERYONE' makes mistakes.

Indeed they do. Usually they're not sexual felonies.

At least, for the most part, the other candidates have the smarts to keep their pie hole shut. And this is where you'd think that a politician - any politician - would be savvy enough to keep away from the religious right. It almost always backfires in hypocrisy.

But what increasingly amazes me, and so far, I have not heard a beep about this in the 'liberal media' - including the gay or political blogs - is that no one has said 'boo' about the girls themselves. The ones that are still part of this family. The ones that still lived under the same roof with him for years and put on a pretty face (metaphorically speaking, of course) and do all this media shit with the family - the one that clearly favoured their son over them.

It has to be like being touched - down there - all over again.

UPDATE:  I totally forgot to include this......

I agree with this--in fact, I said the same thing on my blog:

In that family, the girls are expected to be like the mother: subservient baby machines. They don't matter as long as they do as they're told and spit out kids.

The bigger they are, the harder they fall comes to mind.

That video is perfect for this. I enjoy picturing Tony Perkins huffing glue in an alley in 20 years.

I'm still trying to figure out how he sued the State and won to keep DHS from investigating any more. Oh yeah, his dad was a House representative here.