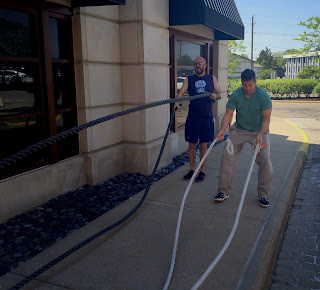 Sunday turned out not to be a yoga day. I think we already knew it, but David and I hadn't seen each other for two weeks, so it sounded better that we were actually active as opposed to just meeting for tea.

Lululemon has Crossfit this month. The first time we didn't know and did not dress appropriately (i.e. Birkenstocks do not make for good Crossfit footwear).  Sure Lu2 needs to expand who comes into their store, as every 28-54 year old white female has already purchased all the store has to offer.

Crossfitters can wear see-through leggings too, ya know!

Secretly, the first day I was happy I didn't have workout shoes. Mentally, I was not prepared to do Crossfit bootcamp. And as physically demanding as it is, mentally it is a lot worse. One must stretch that grey matter to get through that hour.

But Sunday, we were prepared - as much as the two of us ever can be. And we liked the idea that they'd (Crossfit Independence) be doing this outside, as it was a beautiful day.

There were an odd number of folks, so breaking up into teams of two didn't work. Three of us guys (minus Frankenasian) teamed up. The rest of the group were women. It could be argued that two of us three guys were girly too.

You know a Crossfit guy or gal from soon after meeting them - because they LOVE to talk about Crossfit. I cannot tell you how many countless plane flights I've had with a seatmate extolling the benefits of this 'miracle'.

Honestly, some people do good with it, some people are just mental. And the latter skews higher. But so do the injuries. I'm already battling more than my share of exercise related maladies, I'm not looking into adding to those - let alone pay for the ability to become an invalid.

Let's be honest here: what we were doing was Crossfit Lite.

There were no hardcore overhead presses. There was no dead-lifting 350lbs. There were no picking up of tractor tires over your head. No chin ups. No pull ups.

We had six stations of activities. One minute working. 10 seconds resting. Times three, per station. And one minute resting between stations. Even I can do just about anything for 45 minutes.   ....well, except sex with a woman. {shudder}

Just due to where we were standing, I think we ended up at the hardest station first - mountain climbers. This was a blessing, as who the fuck would want to do that last?  Not us.

We did jumping jacks. Had I known, I'd have worn tighter undies, as Blobby Jr. was jumping all around too.

We did back bends, lunges, squats (oh, I felt those the next day), throwing a 20lb ball and the ropes you see at the top.

It was fine and all, and we broke a sweat, but it's not selling me on driving 25 minutes each way to Crossfit. My shoulder and elbow would never let me lift the way they do - and unlike yoga, where there is not to supposed to be judgement - I'm guessing there is finger pointing all around at that place. 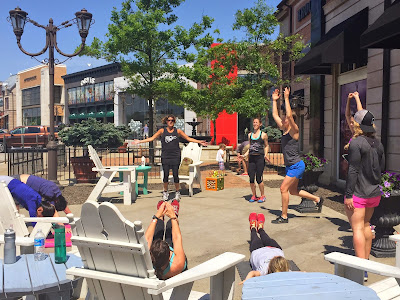 Even our female instruction, used the lovely "c'mon ladies......", like it was being called out by my 6th grade P.E. teacher. So I called her on it - good natured, of course.

It really wasn't too bad at all, but not for me for a long period of time.

Even our yoga class the next day was much much much more difficult. I actually considered burning my mat, for fear of never being able to get it clean again.

"Blobby Jr. was jumping all around" - awww, he wanted to get fit too!

This is what my father calls 'bellman's curse" It took me some time to connect the dots what he meant.