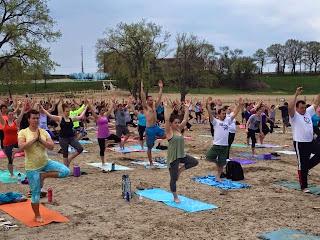 I'm not sure how it came my way, but it did. I didn't know the instructor or any of the attendees who said they'd be going. Still, I said I would "go".

....and then talked David into it - not that he needed persuading.

The practice was free, or donation-based (yes, we donated), but it was at Edgewater Park. And while it said 'beach', I assumed they'd have it in a grassy area. But I was wrong.

The morning of (just two days ago), double-checking the specifics on the FB invite before we were to leave, I noticed that 1.1K (or 1,100) folks said they were attending. I kind of went ' fuck'.

We really left no earlier, but David and I are usually early arrivers anyways - to most things, which is so not our family trait - we didn't dawdle too much (well, he had to play with Petey, of course). As we approached the lot, there were a bunch of cars, but plenty of parking....and lots of folks doing a 'walk'....as it turns out for Weight Watchers.

When we got to the location, we finally found the masses. 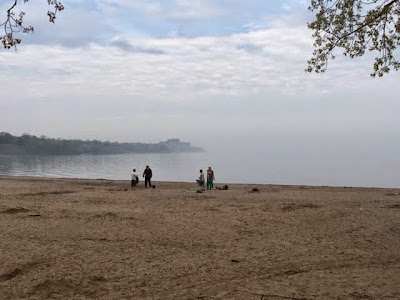 Even with the fog over the lake, it was not too difficult to see that there weren't 1,000+ people here...or coming.

Honestly, we were only there 20 minutes before the alleged start, and two of those four in the pic were the instructor and her assistant. But we picked out our place up front and went for a walk.

I didn't do a count (IKR?), but 150 people might have eventually showed. And David and I agreed that this was possibly the first yoga event we attended where we knew no one else....which is not a bad thing in the slightest.

We started late, because, well, people are assholes and can't seem to be bothered to show up on time for a scheduled event. Their schedule is more important than others and they feel entitled that others should wait for them. I see it at almost each and every yoga practice. "11:07 is really close to 11:00....it won't be a problem", they think to themselves.

At least at the beach they're not continually pulling on a locked door, thinking it will magically open for them. At least on the beach, there is plenty of room where they're not stepping over people who are already in poses or asking them to move over to make room for them.

Yes, these assholes exist.  Many of them.

Anyhoo.....the day started of cloudy, foggy and with a threat of rain, but about three-quarters into a decent practice, it was mostly blue sky and sun.

It was a great way to start a Sunday, and it turns out there will be beach yoga most Sundays from now throughout Summer. Word may catch on and there might eventually be more people attending (though the instructor is going to have a better sound projection system if any others show up), but it will be a great break from our normal yoga routine.

people are so damn ignorant and insensitive of others time and space.

Yoga has really helped you with your anger issues towards others, I see.

I would drop kick those late arrivals, all 1,096 of them!