I went to Duolingo because an NPR piece said something about it teaching you Klingon.

Now, I have little interest in learning Klingon, and I never understood Worf when he talked in his native tongue, but I was curious to see what it all looked like. I was guessing a lot of vowels all in a row, with funky accents over them to boot.

And the languages that Duolingo does teach are the standards. You're not getting Hebrew or Swahili with this (free) app.

Actually, you do get a few ones you might not expect: Indonesian, Korean, Dutch, Romanian, etc, along with the now standards: French, German, Italian, Spanish, Portuguese, Japanese and Chinese.

It's been eons since I've taken French, so I thought this is where I'd start.

I've never done Rosetta Stone, so I don't really know how that works, though I hear good things about it. And when studying French in high school and college, I just stumbled. I could pretty much read things ok. I even might be able to eke out writing some. I was the ugly American when it came to speaking it  - and if someone speaking fluent French talked to me, I was just utterly lost. I could pick out words here and there, but the way the language just flows off their tongue, I can't say I'm good at that.

While you can 'test out' of certain levels, I opted not to and start with the basics. And the basics are fairly basic on Doulingo. 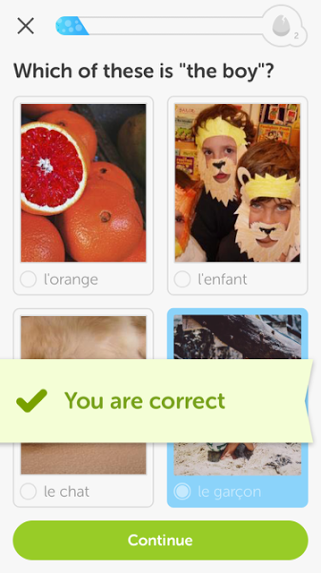 You might not know the French word for 'boy', but if you can't pick it out in picture form, you're kind of fucked from the start.

But it is not all pictures, and I get where the app is coming from. It is about repetition in each level, even though each level gets more challenging. And even with the higher levels, they will throw a few lower level questions in, I suppose to test your retention skills.

So you have levels of Basic, Phrases, Animals, Clothing, Plurals.....and so on.

You have parts where you say a phrase, using a mic, back to the app. 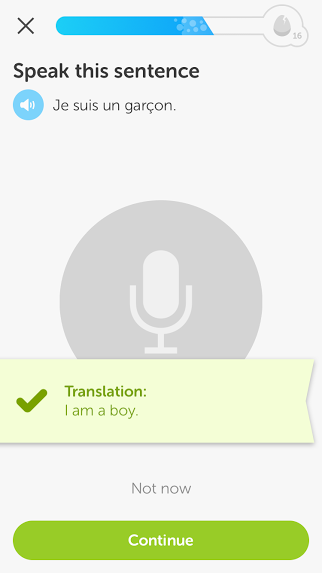 You have written items where you translate from English to French and then others from French to English. And again with the repetition with words, phrases, conjugation, etc. 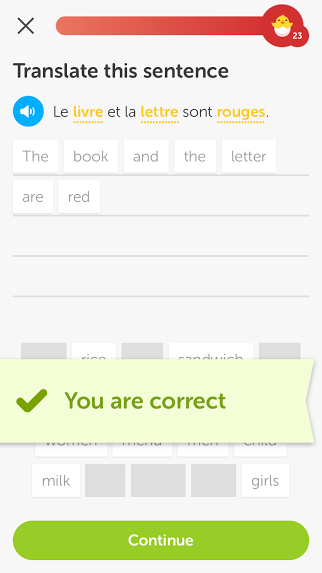 I won't say there is a trick to doing this, but attention to detail is important. I have fat-fingered the choice of words to make the sentence and not noticed and hit submit. Or I have moved to fast and put the words in the wrong order and hit submit. I don't get credit for those activities and you can't go 'back' to fix them.

I also noticed, if you have them in the wrong order (or up there incorrectly to begin with) you can move them with your finger to the appropriate place, as long as you don't hit 'submit'. 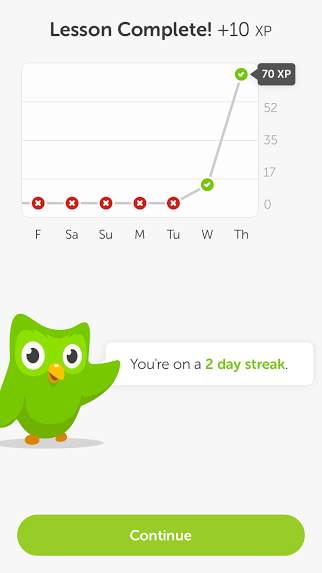 ...and of course, you get the all too important results page at the end of each lesson to know you get a gold star!  I mean, let's face it, it's all about the affirmation.

So after I become fluent in French, I suppose I can try to move on to another language.

Only time will tell if it helps me understand a fluent speaking Frog, but if it gets me from point A to point B when traveling, so be it. That's all I need.

I may as well start with the most important question I will have - right?

I have a few Rosetta stones; this app looks very much like it in set up.

Better brush up on the French and Dutch before you come to Europe (although Nicolas and I can be your in-house translators for those languages...).