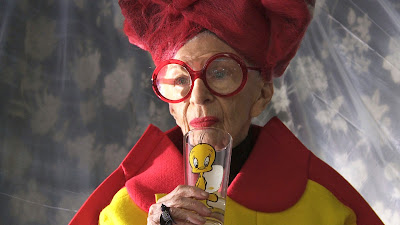 The summer blockbusters are out in full force (no Lisa Lisa or Cult Jam) - and we've seen none of them.

No Avengers. No Fast or Furious. No Tomorrowland. No Mad Max. Certainly no Poltergeist. San Andreas isn't out yet.

So what is a gay man to do?

We had seen previews while taking in other movies at the local art-house cinema. While a documentary (from the now late director, who made Grey Gardens and Gimme Shelter), it is fully entertaining.

Never had I heard of Iris Apfel.  I'm not a gay man who knows that much about interior design or fashion - as I think any of you could surmise from my choices in clothing or house works. But I think it would be a mistake to call it a movie about fashion or interior design.

710 joked that it is a PBS version of Hoarders, but in reality, it is a portrait of a woman who has lived a life as she wanted to, in a time where that did not happen much. It is a story of an individual and individualist, who also happened to marry a man not unlike her in spontaneity, charm and love - as they have been together for over 66 years.

While clearly slightly eccentric, she is a 90 year old force with which to be reckoned. Iris has exhibits of her collection(s) at various museums and helps educate fashion students, as she believes most designers are just fame whores who don't even know how to sew. As I have never even watched 34 seconds of Project Runway, I can only surmise that she is 100% correct.

Oh - she also sells a line of slippers and costume jewelry on HSN.

Iris and her husband did well enough in interior design to have their Park Avenue apartment, her mother's old apartment (for storage), a warehouse (for storage) and a Palm Beach condo.

Iris isn't a superhero who somehow resurfaces after centuries underground to protect us from the evil Deathron who seeks to destroy mankind?

Now that I will see. I have that very same Tweety glass, I collected every one in the set that summer of my youth.