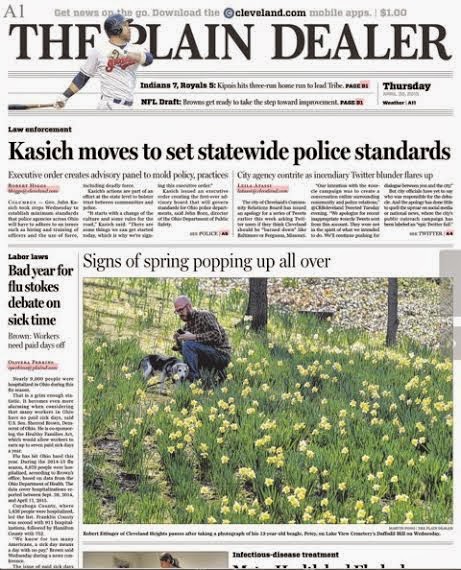 I suppose there are worse ways to make it onto the front page of the newspaper.

At lunch on Wednesday, I took Petey for a walk. Normally we do our 1.2 miles around the 'hood, but I like to mix it up for him when I can, so we went over to Lake View Cemetery.

I know what you're thinking - ewww, a graveyard, but it is (or can be) a really nice one. And it's huge (that's what she said!).

Years ago, I took Morty, Becca and Dith there for a Geocaching "adventure". Due to a glitch in my host back then, the pictures are gone. I suppose, I could try to dig them up and reinsert them.

But Lake View has a lot of Cleveland celeb bodies interred there: Jeptha Wade - the founder of Western Union. John D. Rockefeller (yes, that John D. Rockefeller). The Van Swerigen brothers - Cleveland railroad tycoons, who built Shaker Heights, never married, lived together all their lives and shared a bedroom in their 54 room mansion (ewwwww!).

But we also have this: 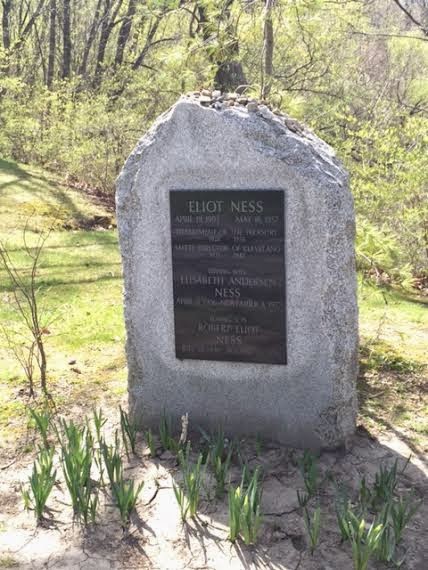 Kevin Costner Eliot Ness and his family are buried here. 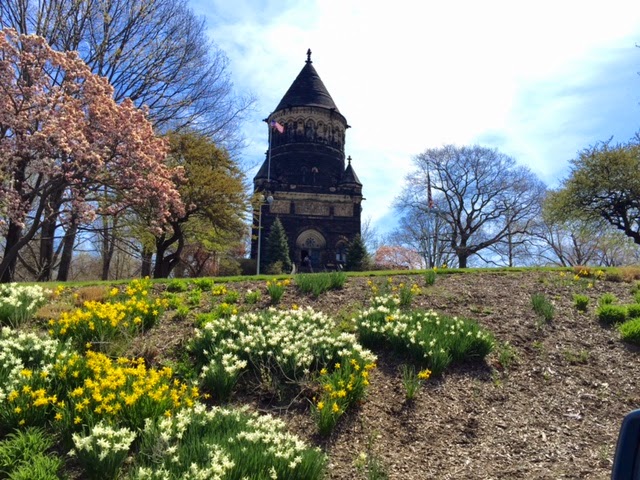 As is President James Garfield.

It's a great monument, though somewhat overdone for someone who was president for only three months. For those unfamiliar with history, he was assassinated.

...or course thousands of Muggles are buried here too. 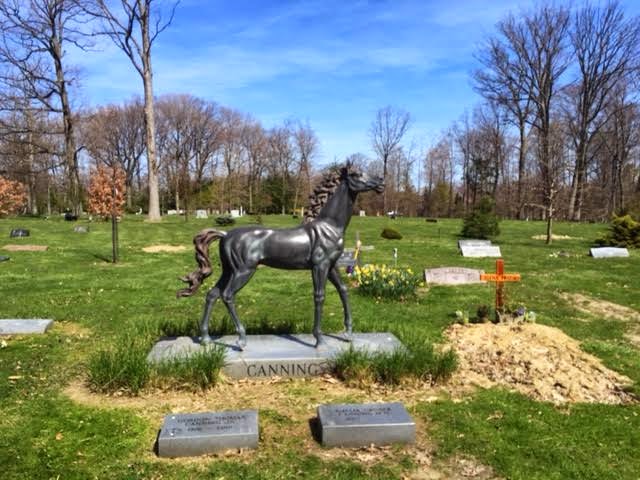 Oddly, the grave on the right is not new. It looks like it's from the Old West kind of burials, but unless they reburied the guy recently (and wouldn't they do a better job?), he's been dead since 2010. 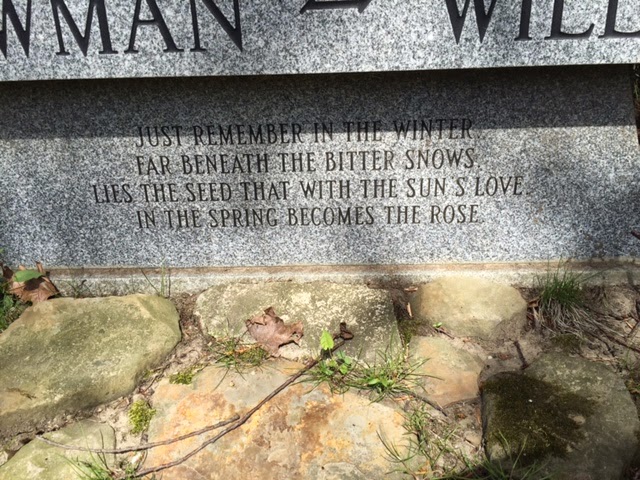 And then this person reallllllly likes Bette Midler....or something.

But as Petey and I walked through, we came to Daffodil Hill. Yes, it's exactly as it sounds. A hill that once a year is covered in daffodils.

As we went through it, I attempted to take Petey's pic amongst the flowers, but you know how cooperative he is with posing.  ....or any direction.

While I tried, it seems someone else was taking our picture. 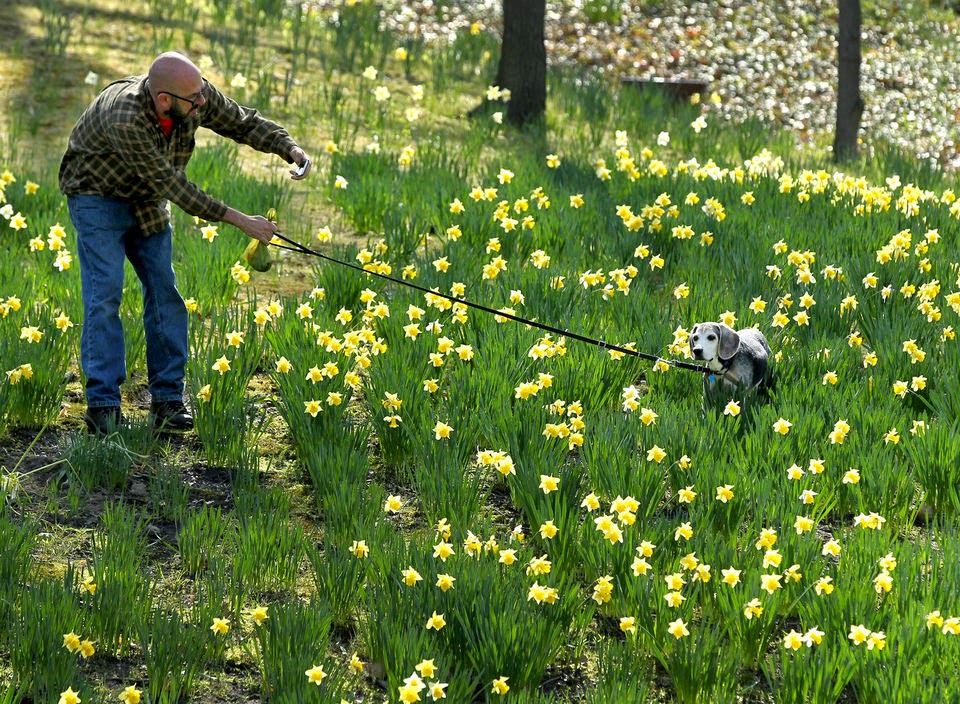 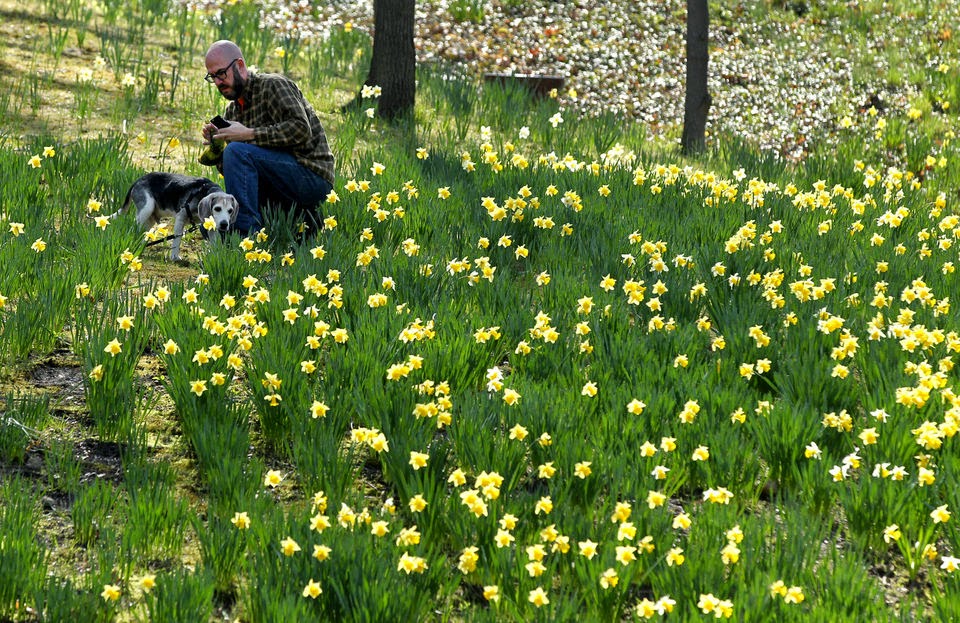 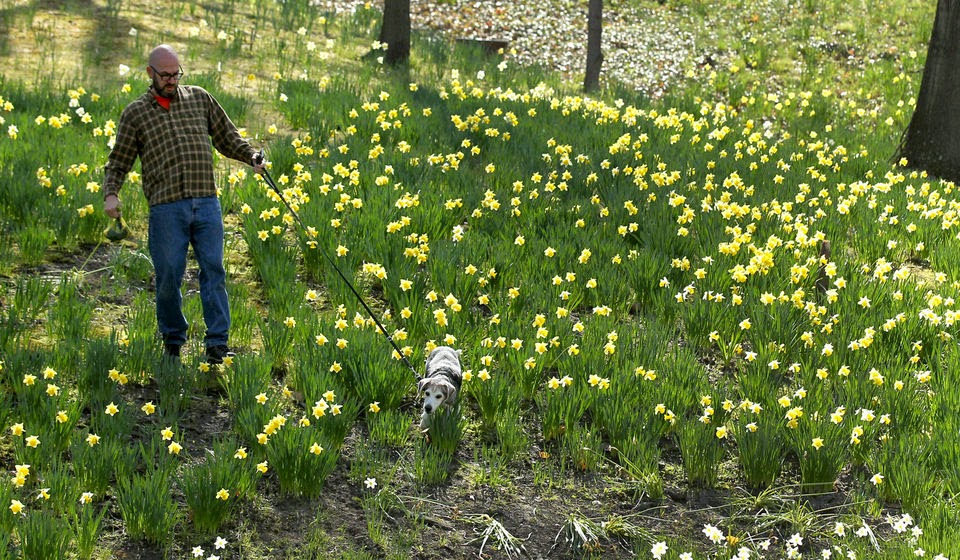 It turns out he was taking pics of Daffodil Hill for the Plain Dealer and was lamenting that there was no human element in the picture.....and then a man and his dog came over the top of the hill. BTW...I'm the man.

I love the first pic (if you enlarge). Something about the waves of the flower stems looks really great. The last pic makes me look like I'm in the closing credits of Little House on the Prairie.

Anyhoo.....he asked to pet Petey, and got my 4-1-1. I assumed it would be only be on cleveland.com (and it is), but imagine my surprise when it made the front page of Thursday's paper....which now I will have to go purchase.

The PD only gets delivered four days per week....and this is not one of them.

The oddest thing about it all?  On a later Wednesday afternoon, I get a message from Mary, a former neighbor.  "You and Petey are on cleveland.com".  And we were.  I just can't figure out how she saw it. On that site, which is horrible to navigate through any day, we were buried in a subsection of a subsection.

And then I get home, and my mother's former boss emails her saying that I am on cleveland.com.

Wow....these people really have nothing better to do with their lives than troll this site?

Petey is completely unaware of his celebrity.

you're now famous! and it's a nice picture of you and petey!

Nice looking Beard you got there Blobby!

Graveyards can be lovely and interesting places, not to be shunned.