Cut Above the Rest 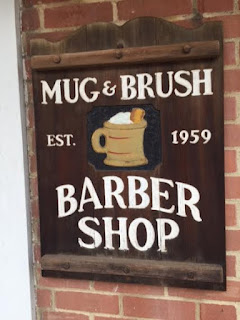 As I was walking Petey the other day, a neighbor mentioned my über manly beard.

Despite what Rebecca and Jon think - it does not make me long for a razor nor make me look a 'wee bit homeless'.

Anyhoo - Mark (the neighbor) asked what 710 thought of the beard. I contemplated for about 12 seconds and said: "he hasn't said anything about it one way or the other - so I'm assuming he isn't a fan."

My mother hasn't said word one about it either, so I'm sure she loathes it. C'est la vie.

Granted, the beard was a little out of control, and I knew at some point I would have to trim the thing - or shape it. I was just getting it to a point where I could and it would remain full.

At lunch yesterday, knowing I had a meeting on Monday, 710 "suggested I get a trim, which I said I would do. But he wasn't really leaving it up to me - suggesting, after we were done with lunch that I go to a barber and have them trim it.  ....something I've never done.

For the most part, I haven't stepped foot into a barber shop in at least 15 years. I buzzed my own hair. Actually, five years ago, I did got to a barber in Columbus so he could shave my head and then I took it over from there.

As we were on our way to my mother's house for a visit, the only barber shop of which I was aware was the one I went to as a child: the Mug & Brush.

We walked in and only one of the six chairs was occupied. Five barbers were sitting there. The dichotomy of the shop was amusing. I'm not sure - save the Playboys being removed -that a thing had changed in 40 years, except for the fact that each barber was sitting there looking at their iPad of smart phone.

Charlie, the guy who cut my hair (and my fathers, and my brother in law and my nephew and a few people I used to work with), had died a few years back. The bigger surprise would be: he only died a few years back. But the first question they asked me was if I knew Charlie. I tried to regale them with stories of my visits as a child - yet no one seemed to care.....or look up from their iPads or smart phones.

Vince (I think his name was), did an ok job trimming my beard. It's a little shorter than I wanted and there are still some stray hairs I need to clean-up myself. Oh, and at first, he forgot to put the cape on me, much to his co-worker's chagrin. He also made the neckline uneven - so I have to fix that myself. 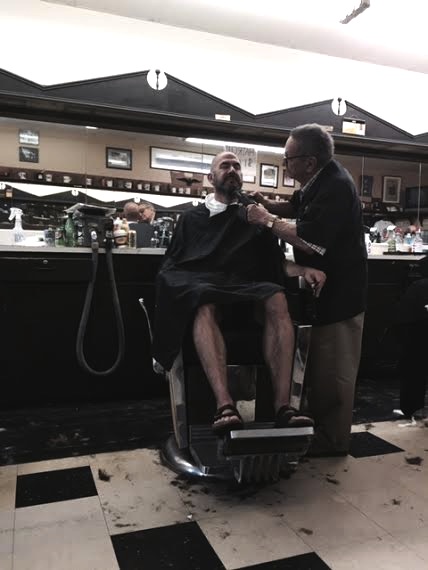 I guess you get what you pay for.

But I'll be neat(er) for my meeting and now the beard has a little shape - and I'll see where it goes from here.

Email ThisBlogThis!Share to TwitterShare to FacebookShare to Pinterest
Labels: Beard

I think beards look best when kept neat and trimmed.

I love having my beard trimmed by the barber once a month; what a treat.

Maybe I should find a barber... it seems to be the thing you hip, young cats are doing.