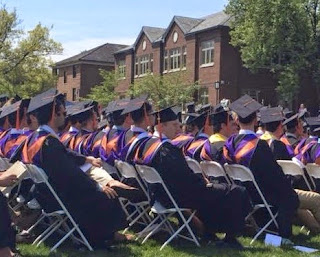 It was a little less than four years when my oldest nephew graduated from high school. Where the last four years went, where this last weekend we were attending his college graduation, is beyond me.

While going to his ceremony was nice and I have always had a strong bond with my nephew, I didn't feel I needed to be there. I was more compelled to go so I could take my mother.

Being 86, she didn't have a chance to see my oldest niece graduate two years ago. My father couldn't travel and she couldn't leave him. And being that she's 86 and her next grandchild won't graduate from college in at least four years....well........this might have been the only time I could do this for her.

So after putting Petey up at the kennel {sob}, 710 and I headed out and picked up my mother. We were going up the day before graduation, as it was too long of a drive to and from the Finger Lakes area of NY to do in a day.  And graduation started at 10:30, so.......

As we went to pick up my mother, 710 and I decided if the weather held, we would make a slight detour and take my mother to the American side of Niagara Falls. I know she didn't have a passport, so we couldn't do the Canadian side.

As it turns out, she kind of dozed off outside of Buffalo so she didn't even see me make the turn-off without ruining the "surprise". We were much closer when she snapped to and asked what 'that river' was. The jig was up.

She had been to the American side, though I didn't know that. And we haven't been since maybe 2000. I was surprised how much has changed there. Not of the Falls, of course, but the actual park - improvements in parking and buildings - they had shuttles. It was a little commercial, but ok. I love this side of the river for the beauty of walking through and over the rapids without the tackiness of the Canadian side.

We tried to get some pics, but I think I took more pics for other people who asked for my assistance. I was happy to do it.

After that, we made our way east to meet up with my nephew and his parents for a few drinks on his porch.

Lord - no matter where you go, campus housing still is iffy - at best. While Matt lived in a house, it was considered campus housing. Shared living areas, kitchen and bathrooms, but everyone had their own bedroom. Both men and women lived there. Each house has a theme, and his was the 'Writer's House'.  It was still kind of a pit, but I suppose with eight early-20 somethings, that is to be expected.

The grounds for dinner were great - right on Lake Geneva (or is it Geneva Lake?). While warm out, the water was not, so fog rolled in. It was neat to see. 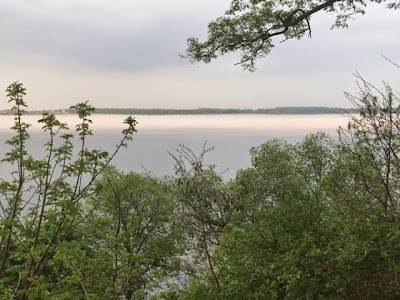 Dinner, for however nice a place this was, was questionable. Our server was nice, but the kitchen was abominable. My brother-in-law who is never mad, was mad. We (or he) ended up with free drinks, free dessert and a $50 gift certificate. The latter was nice, but when would we be up this way again to use it?

As it turns out, Matt was staying an extra day, so he went the next evening and took his girlfriend. 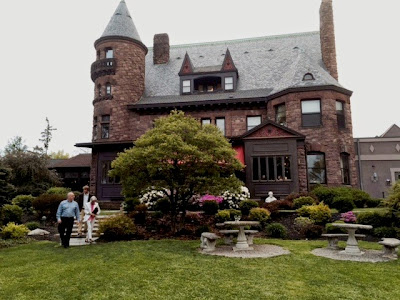 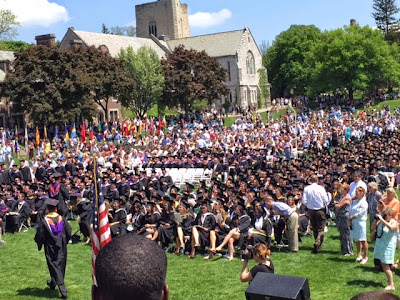 But we got to see the speakers (David Gergen was the big one - though I have seen him before). And we got to see Matt cross the stage.

Since he was staying and his parents weren't, we loaded up my mother and made the trip back. The long long long trip back. And we had to spring Petey by 19:00 or wait another day to get him {as if!}.

I love my mother, but honestly, it's the first car trip I've been on with her since high school, and it had its moments of enjoyment and, if I had any, times where I would have pulled my hair out.

The downer of the weekend was looking back at the pictures. I see my mother weekly, but until I saw her in pictures, I didn't realize how old she looks. I was no prize to view in any of the pics either.

Are you sure that's not Seneca Lake?

congrats to matt! a cornell man?

Was that Hobart College? You mentioned what I think was Geneva on the Lake. Hobart is located in Geneva.