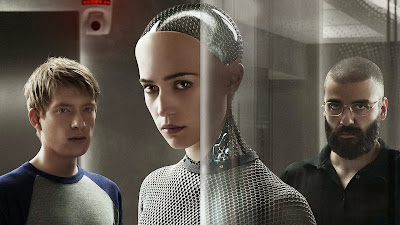 The plan was to go see the new Avengers movie. But a low pressure system thwarted those plans. Honest.

My "bad" leg was acting up and walking far wasn't really on the table. So, we went to the local art house, as opposed to the multi-plex.

In one way, the multi-plex would have afforded a lot more leg room, but I traded a shorter walk and travel time for movie comfort.

We went to see Ex Machina instead.

I knew next to nothing about it. But it seems something like Westworld (for those of you of age) and Spielberg's AI with more than a touch of Kubrick.....and maybe even a touch of a Blade Runner replicant.

There is a science and psychological aspect to Ex Machina. In certain ways I knew how it would end, but not exactly (no worry - no spoilers here). I thought the three main characters did great jobs, especially the guy who played Nathan (and it doesn't hurt that he was kind of hot.....at least my kind of hot).

Actually, Ava, the AI machine, is very good at straddling the line of robotic and human aspects. She really carries the movie.

Oddly enough (?) the alleged protagonist is probably the weakest - though not bad at all. And since really there are only four cast members (and only three speaking roles), someone has to be the lower rung.

There was a physical aspect to the movie as well, that made me potentially squeamish where I had to look away - and trust me, I turned back too quickly. It's only one scene, but it's enough.

But the movie itself has a 'thriller' aspect to it, so you don't really know what is coming. As my predictions on how it would end were somewhat on target (but clearly, not wholly), the in between, I was as clueless as most.

It wasn't a bad choice for a movie. Both 710 and myself liked it, but I don't know you could call it a 'good movie'. I'm sure artificial intelligence is farther along than we know, and it might bring up a lot of philosophical and ethical issues, but this movie isn't truly tackling them.

...and if for nothing else you get to see, albeit briefly, Nathan (Oscar Isaac) tear up the fucking dance floor.   Worth it.

Thanks for the comment on Travel Penguin. I modified 12 on 12 for this month, it is one image from each of the past 12 months, that way if I am not up to posting on the 12th, it is there. I was scheduled to be traveling in Florida on the 12th, and scheduled the 12 on 12 a few days ago just in case. I hit unexpected fork the journey. I will hit the pic a day in May, they are already scheduled through the end of the month.

Just the fact that Oscar Isaac is in it, makes me wanna run to the movies!

Excellent flick!
Good taste in clips I must say. I hadn't realized we used the same clip until you commented on mine. That clip sums up the crazy intense freakiness that is the movie. One of my favorite scenes, plus Oscar can tear up my fucking dance floor anytime he wants.