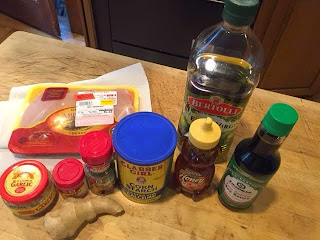 It's been over a year since I made an attempt at Sesame Chicken, and while it wasn't bad, it needed to be improved upon. And I did, though I think next time it can be tweaked a bit more.

The ingredients are few - though more than are shown here, as I forgot to fetch the broccoli and scallions from the icebox.

Actually, neither of those two items were in the recipes I'd seen, but I wanted them in, so I made accommodations for them to be included. 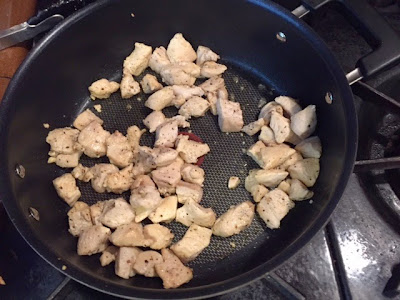 Cut chicken into bite sized pieces. I cooked them in the olive oil with one clove of garlic. Because I really like garlic. 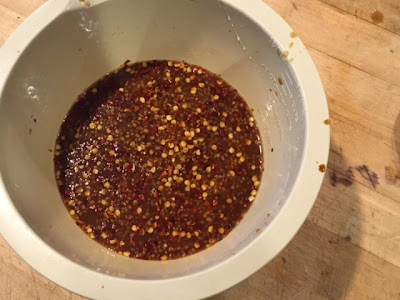 While chicken is cooking, in a bowl put in garlic, honey, soy sauce, water, red pepper flakes, ginger and corn starch. Whisk together until corn starch has no lumps.

At this point, I also used a skillet to cook the broccoli in some olive oil and yes, a clove of garlic. I cooked it enough to warm it through, but it was still crisp. 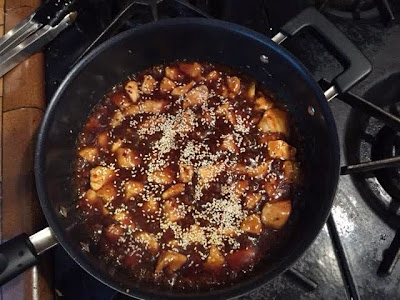 Add whisked mixture with the chicken, bring to a light boil, until the sauce thickens. Add sesame seeds.

And I added the broccoli too. Cover and simmer for 10-15 minutes for the sauce to incorporate into the chicken and it will soften the broccoli a bit too. 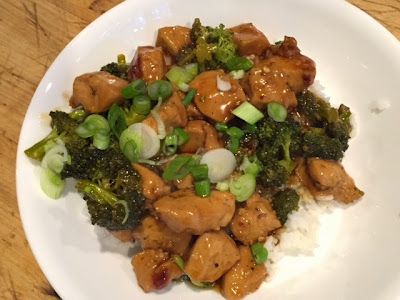 Over some rice (or not, if you don't want the starch) dish up the chicken and broccoli. Garnish with the chopped scallions.


It has flavour and 710 really liked it. I liked it but didn't like it, like it. I still think it's missing a little umph. 1 T of red pepper flakes is a lot and it provides a slow burn as you eat - which was fine, but I still wanted something else.

Perhaps next time I might use sesame oil to cook the chicken and / or broccoli. That might give it a little more of a punch in flavour.

For us, this made three decent sized servings (one each for dinner, and one for someone's lunch). Adjust your recipe depending on how many folks you are serving.
Posted by Blobby at 12:08 AM

I'mma not a big garlic fan, so I'mma leave it out. but the rest of the recipe - YUM! I have most of the ingredients already in house.

And this sounds so tasty, too!