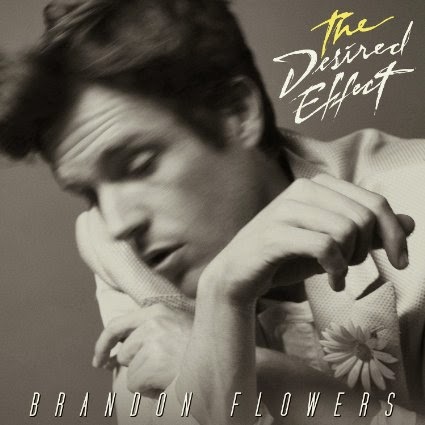 Since making Brandon Flowers a My Music Monday selection a few months back, and informing you all of an impending album release with the Desired Effect, you kind of had to know this album review would be coming - right?

On one of his new songs, "Never Get You Right", Flowers sings "....it's a coin toss".  While he's not speaking about his record, he could easily being doing just that.

As I had pre-ordered Mr. Flowers' album, about one song per week has been released to me. I had 40% of the album in my "hands" well before the actual album release date, but that came with very mixed results.

I am still finding "Can't Deny My Love" to be my favourite song of 2015. I would expect that to change as the year went on, but he could surprise me.  It will be in the top 5 for sure.

The following two songs sent pre-release were a disappointment. "Still Want You" is the antithesis of "Can't Deny My Love".  It. Is. Horrible.  Just one of the worst songs ever, let alone his. I can't imagine that Flowers and his producer sat around the studio afterwards, going "man, this is really good!!"

"Lonely Town".  Meh.  Like a lot of songs by the Killers, it has an 80's vibe, but this one isn't a good vibe. The keyboards are bordering on DeBarge and Nu Shooz territory - and there is no way that some of the vocals (at the 0:59 mark) don't sound exactly like the lead singer from a little known group - Cock Robin.

Flowers covered his 'lonely town' laments much better in his last solo release with "Playing with Fire". We get it - being a Mormon in a small town wasn't ideal for you. The crass auto-tune moment does nothing to help the cause. Even if he changed these elements, the lyrics are way more repetitive than most of his songs.

With "I Can Change", we get redemption. While more than a little sampling Bronski Beat's "Smalltown Boy", Flowers makes the song work. I like the vocal arrangement, I like the chorus more than the verse, but that works too. The song abruptly drops off, for a very weird transition, yet it kind of still works on that level as well.

The rest of the six songs are like the first four: hit and miss. None truly rises to the heights of "Can't Deny My Love" or "I Can Change". A few try. The hits don't make it as high as those two songs, and the misses don't really sink to the levels of "Still Want You" or "Lonely Town".

"Dreams Come True" and "Between Me and You" have a Sam's Town quality, but more like a song that didn't make the cut to that album. And the title in "Dreams Come True" is repeated far too often. But when Flowers opens it up like at the 1:10 mark in "Dreams", he is golden. The problem is, he doesn't do this far enough or for long enough.

Unlike his last solo disk, Flamingo, Flowers seems to strive to sound more Killers-like ("Digging Up the Heart", "Never Get You Right" and "Untangled Love").  Some of this works well - like "Untangled Love", but some of it I think would have been in better hands with the band. I don't think it is coincidental that "Untangled Love" features the Killer's drummer.

I can certainly do without "the Way It's Always Been".

I've said it before with other artists, and will no doubt say it again:  an artists will be remembered for the great songs and the awful ones. It's the mediocre that drowns you - the songs no one will ever remember - and when you only have 10 songs on a disk and 3-4 of them fall into that category, it weighs the entire album down.

Flowers is capable of so much more, but he's not producing it here.
Posted by Blobby at 12:11 AM