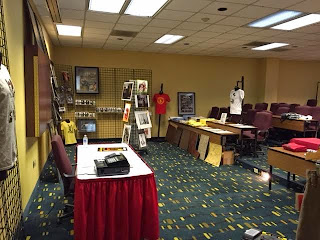 For the third year, I opted to work at CLAW - the Cleveland Leather Awareness Weekend.

It's not that I have a penchant for wearing leather, but they do raise a good deal of money for Cleveland AIDS groups. And as I've said in years past, it is certainly worth the time to sit / stand and people watch.

Actually, this time I worked for CLAW.

This year, I became a bit more involved - in the organization, as well as the people watching. The head of CLAW asked if I would like to run / manage their art co-op. It certainly seemed easier than heading the volunteer program. It certainly seemed less strenuous than security or coordinating the set-up / tear-down process.

"Art" is questionable, of course and in many regards. Let's just says I started with a number of pieces that no one has bought for years and it ended up in storage. But in the past, it never got its own space, so it was buried in a myriad of other components of the space.  This year, it had its own space and we sold not just art but vintage t-shirts - not leather related per se, but.......eh, it worked.

Let's just say, I helped make the art co-op sell and make more than it had in the last few years combined. So I'm proud of that.

As such, it was all work. Once again, I did my people watching from the confines of room to which I was assigned. I did none of the education sessions (again), but I was probably never going to go to ones that were called "Knife Play" or "Foreskin Restoration".  And yes, I see the irony in the two classes I opted to put down here.

Here was one such person, of which just intrigued the shit out of me. 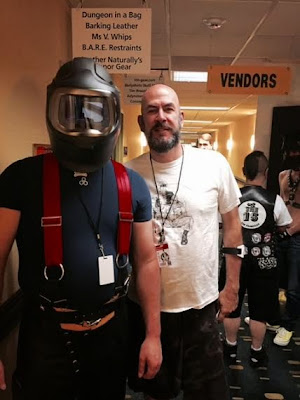 Fireman type gear, and a full on helmet / mask with a working respirator. FREAKY.

....and still it wasn't nearly as disturbing as those guys who run around in dog masks panting, barking and growling at each other. That just fucking weird to me.

I suppose it isn't odd, being my third year, that I started to not only recognize certain faces, but place names to them. I won't say I got to know any of these people really, but considering I had to be on planning phone calls with a core group, it was easier to associate this time out.

And I was given my own volunteer staff. I was the big cheese. Well.....I was a bigger cheese. But like all other aspects of employment, you have the folks who do not show up for their shifts, making you scramble to do stuff yourself, extend your hours, or ask the volunteers who do show to do more.

But the volunteers have a sweet deal - if they do their shifts, they attend CLAW for a heavily discounted rate. It use to be you'd get in for free, but it used to be they didn't take a deposit to refund. So in the past, you could sign up get your badge, shirk your duties and still get in at no charge.

That has changed. Now you pay. If you do your shifts, then you get a signed form and a reimbursement. It cut down on, but not eliminated, the flakes. I still had no shows.

I had a few good volunteers over the course of the weekend. Two cuties. Then two nice guys who didn't do much but stand around and fraternize with the attendees. I didn't trust anyone enough to actually run the cash register or credit card machine, as it was ultimately I who was responsible for the balancing of the cash bag at end of day.

But I did have two interesting volunteers - and here is where I will get an F in Gay Studies.

Both were transgendered folks - female to male. Both had breasts. Both had beards that went down to the middle of their chests. And they were partnered. And yet at least one of them has a "Sir" - unless the one was referring to the other as his (?) Sir.  (they didn't work the same shifts.)

This where I fail. Men trapped in women's bodies, physically partly transitioned, partly not. Are they gay men? I felt the need to whiteboard it and diagram it all.

Like working at the Gay Games, I seemed to be more of an Ambassador for Cleveland than anything else. Telling out-of-towners things they could do while here. Talking up the city. I'm guessing 99% of them ended up at the baths - which was not one of the things I suggested....btw.

While I'm sure "stuff" went on up in the rooms, in the common areas, people are just people - though tightly packed into leather, where most of them should not be. A few passed muster. A few turned heads, including a guy I chatted with who is friends with BosGuy.

But it was nice to see men be able to express themselves with hugs 'n kisses and some touching in the middle of the Holiday Inn - Independence. For all of the movement we have made on same-sex marriage in the country, I don't think we still express physical emotion publicly the way straight folks do. So it was nice to see it done with comfort here.

Again, for me it was all work. Setting up took a good part of a day. The open hours were long and on my feet all day, trying to get people to buy questionable art that they'd want to take back home. Breaking down the room was so much easier - maybe only 90 minutes. Again, I had a good team that day, and I devised a plan on how to break down efficiently.

I say it every year, but I'm not sure I'd do it again. I'm not saying I won't. I think I liked help planning it more than just showing up to do a task, as I feel like I helped accomplish something....though I'm not sure what that was.

I haven't heard the final tally, but I would guess overall, we probably came close to $45-50k for Cleveland AIDS charities. So, that's not bad.

...but you don't want to be 'bad' here, or you might get paddled or something. And trust me, two vendors were selling those and only those.   eeek.

I don't have the best memory in the world but I honestly do not remember you ever talking about this before. And the baths are still open??